Butterbeer is a slightly alcoholic magical drink said to taste of less-sweet butterscotch. It is served both hot and cold in bottles or by the foaming tankard. It is known to be sold at The Three Broomsticks, The Hog’s Head, and The Leaky Cauldron in Diagon Alley. It’s alcohol content is enough to get house-elves drunk or make humans a bit giddy. 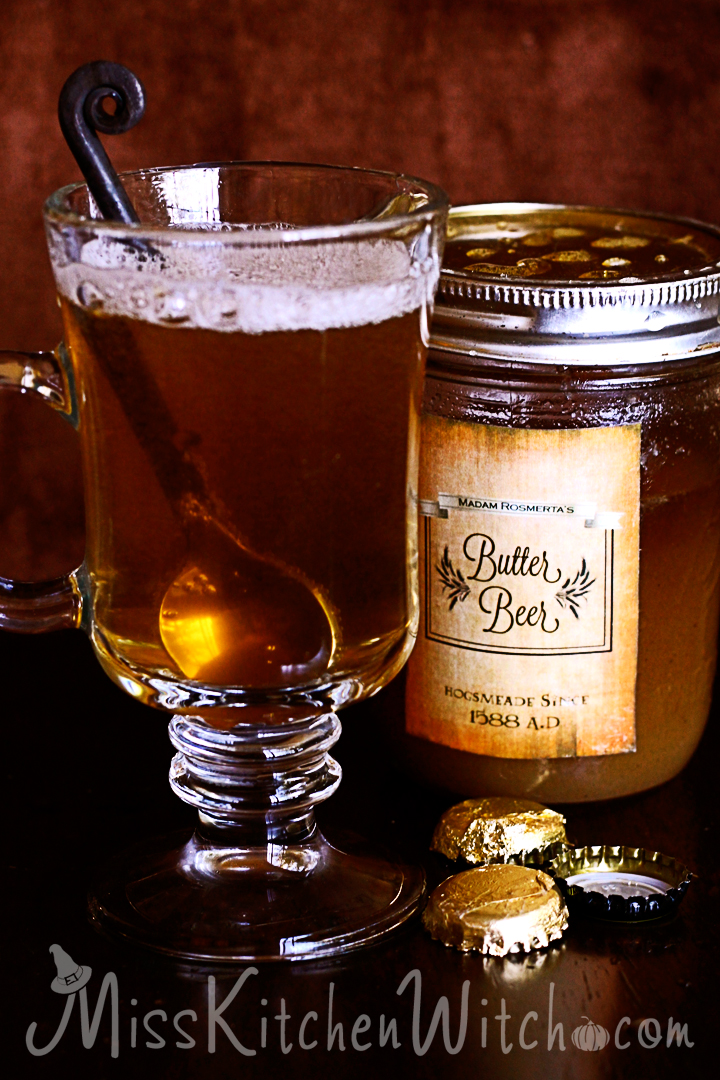 Harry and Hermione made their way to the back of the room, where there was a small, vacant table between the window and a handsome Christmas tree, which stood next to the fireplace. Ron came back five minutes later, carrying three foaming tankards of hot butterbeer.

Harry drank deeply. It was the most delicious thing he’d ever tasted and seemed to heat every bit of him from the inside.

There are so many variations of homemade butterbeer—ranging from creamsoda ice cream floats to spiced ale with egg yolks or soda with schnapps. None of them read less-sweet butterscotch to me and nearly all of them have non-vegan ingredients. I liked the idea of starting with beer because of the low alcohol content and the natural head. With help from my beer-afficianato friend and a bunch of guys at Bevmo I took the plunge with some scotch ales that boasted strong nutty or butterscotch notes that would lend themselves to mixing. I’ve mixed peach lambic and hefeweizen before, so why can’t I mix myself a butterbeer? 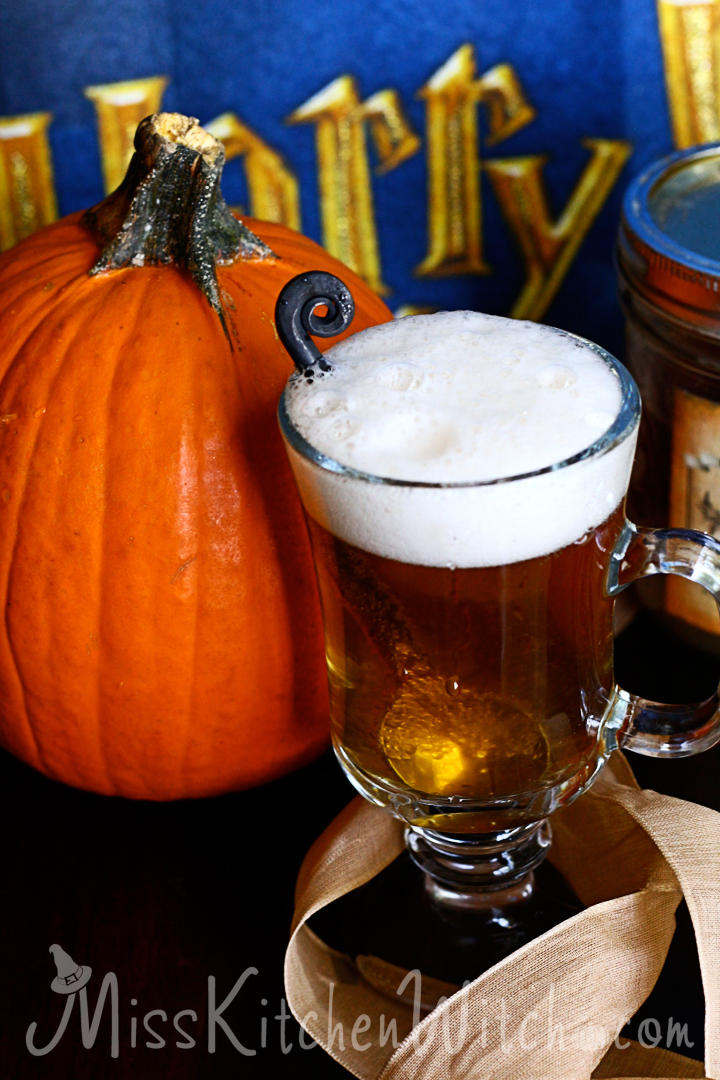 First, I had to come up with a suitable vegan substitute for butterscotch schnapps. Every butterscotch alcohol or extract out there is made with dairy butter. It may be parve and may not list milk in the ingredients, but inquire with the manufacture and it is nearly ALWAYS made from butter. Last year, I came up with a recipe for Dandies Marshmallow Vodka. I thought that would be a great place to start. This time, I toasted the marshmallows for the color and caramel flavor. I then added the beer to take down the sugar level and give it a hint of yeasty, brewed flavor. It is butterBEER after all.

If you’re not partial to beer, leave it out. This scotch ale is good, but strong in flavor and alcohol—coming in at 8%. 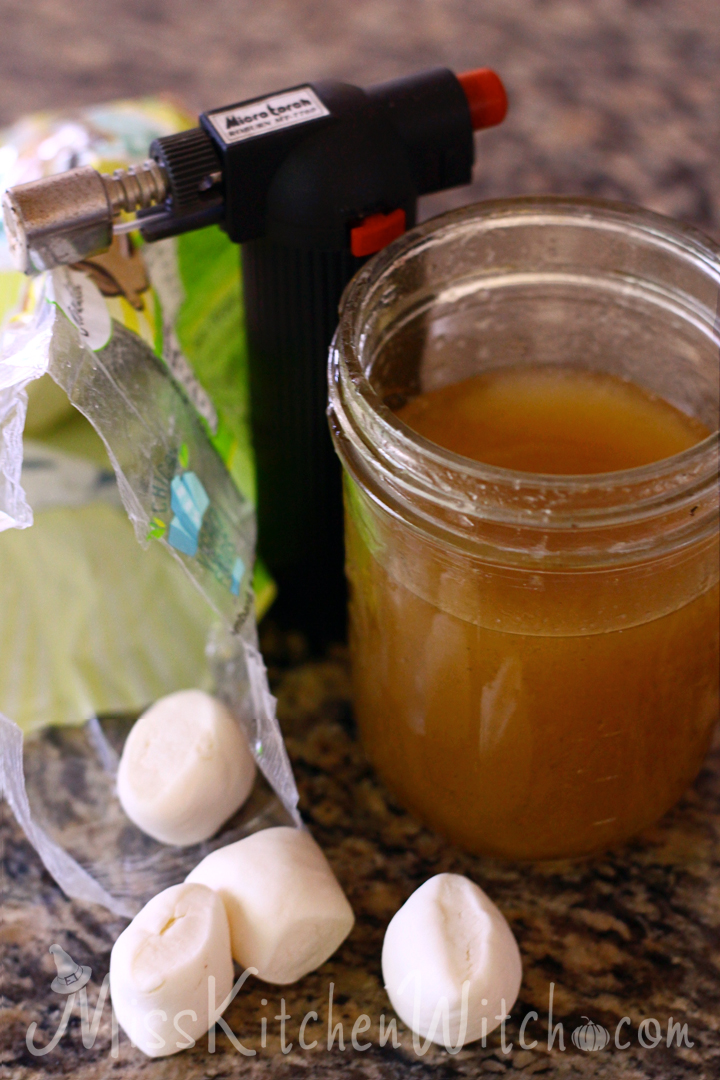 Roast the Dandies until fluffed and crunchy. I didn’t mess around–pulled out my crème brûlée torch and went to town. 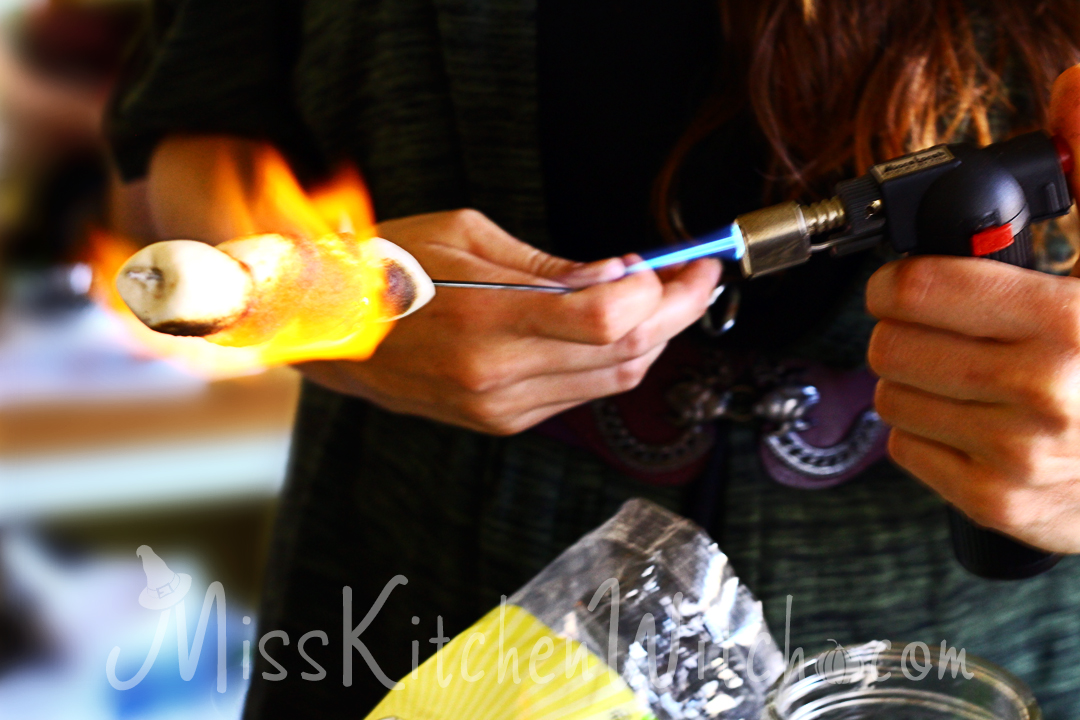 Load into a pint jar and cover with vodka. Shake a few times then let sit for a day, shaking every so often. 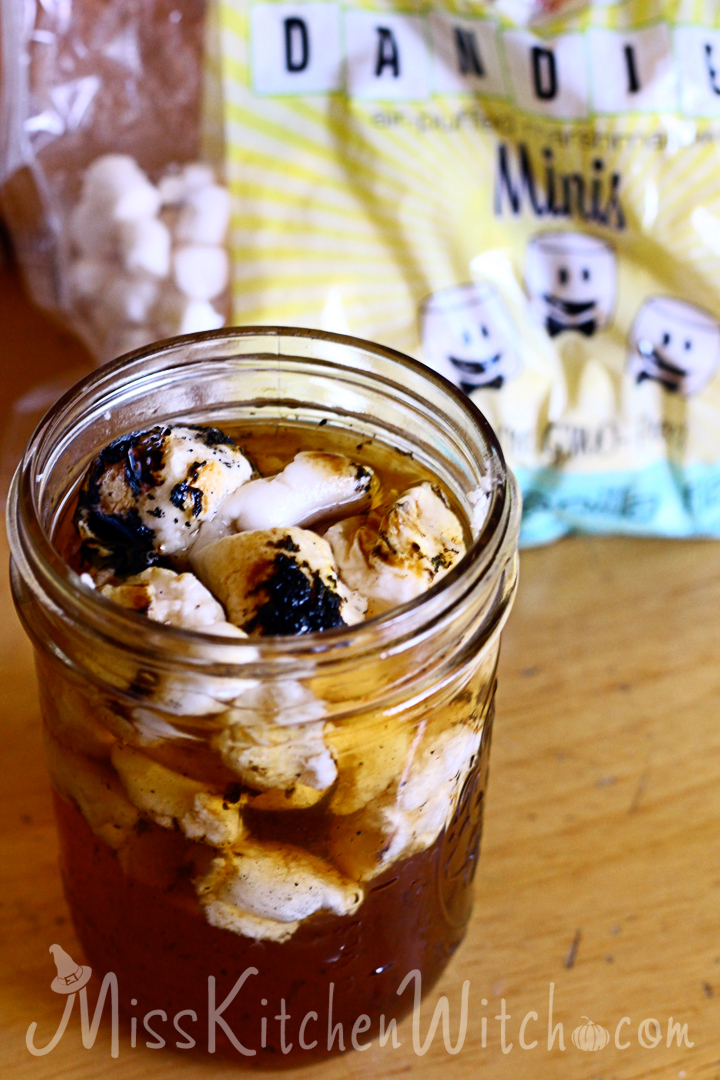 After 24 hours, strain through fine mesh. 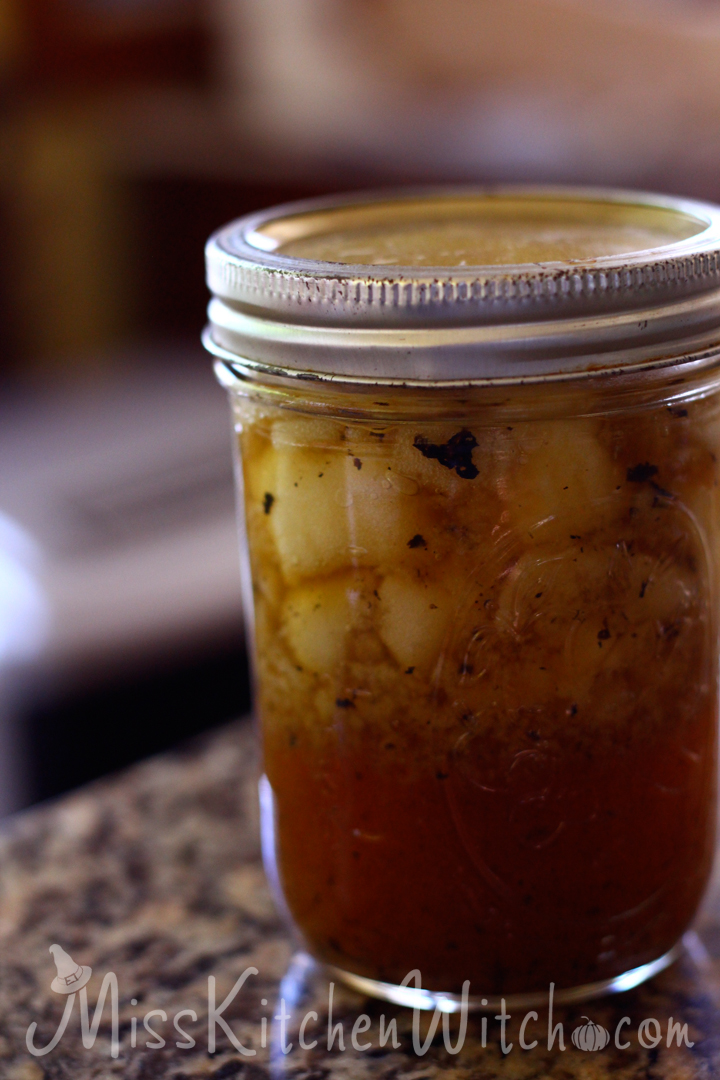 Mash the soaked marshmallows and strain a few more times. I strained once through muslin as well. 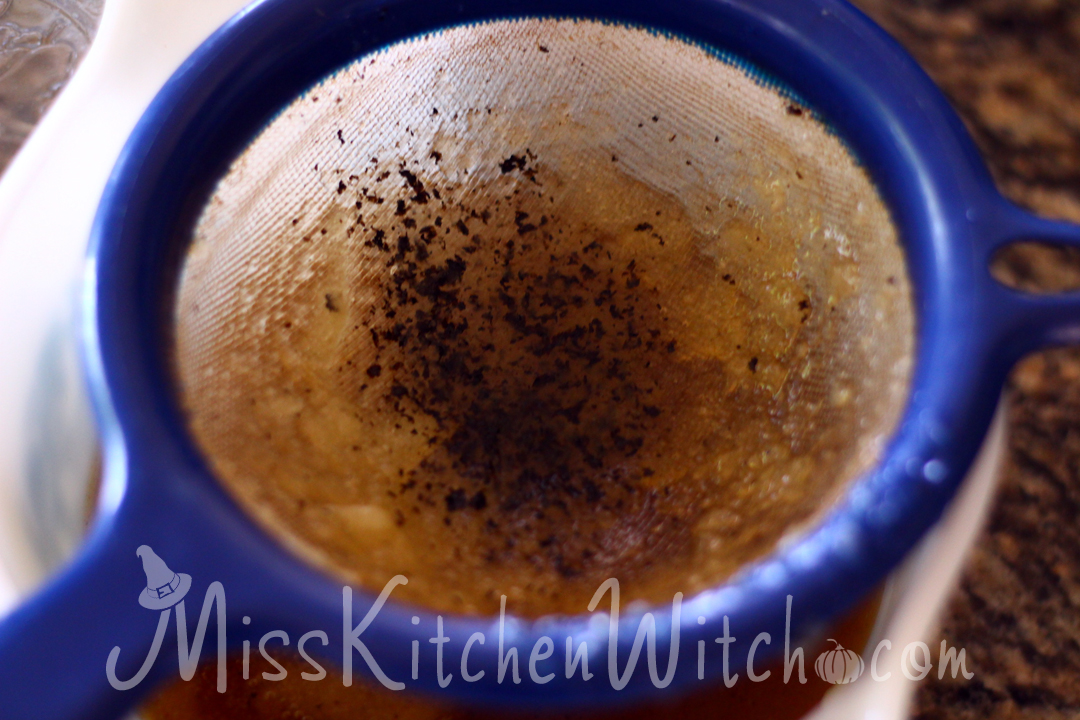 Discard the left over mush or keep straining until it is full liquified and you’ve remove most of the charcoal. 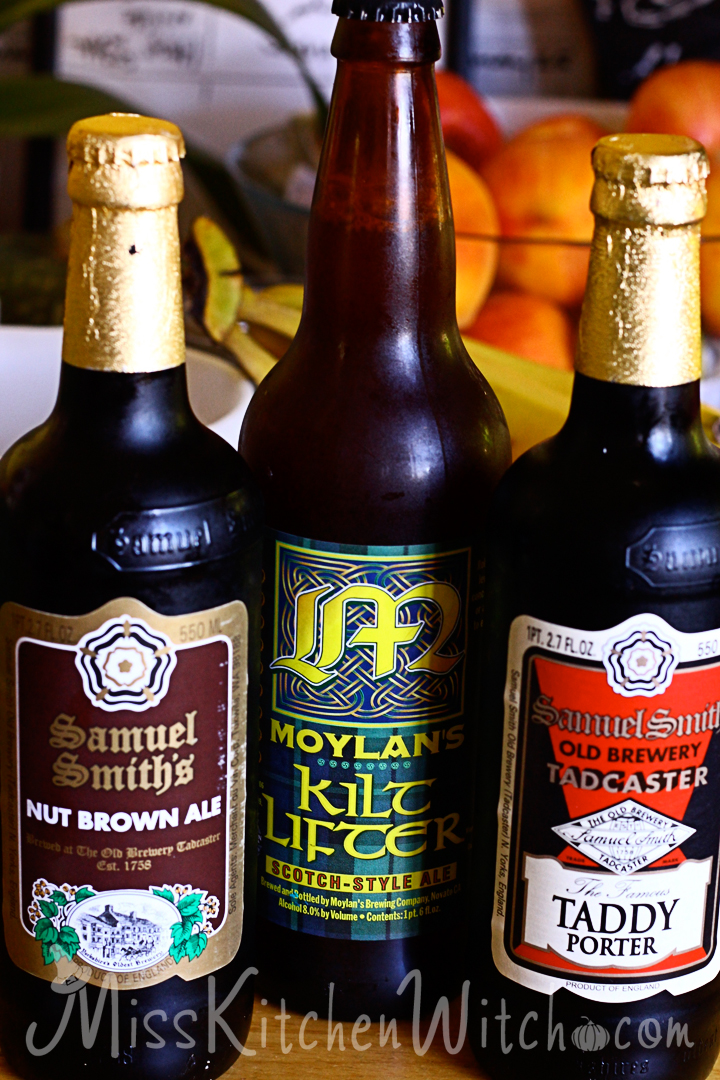 For the butterbeer, I tested a Nut Brown Ale. Nope. The ale was fine, but it was too sour. Next was the Porter, which my boyfriend preferred—but he likes rich beer. It had a little bit of chocolaty-boldness to it.

Moylan’s Scotch ale was the best of the three. It really paired well with all that extra sweetness, but held it’s own. 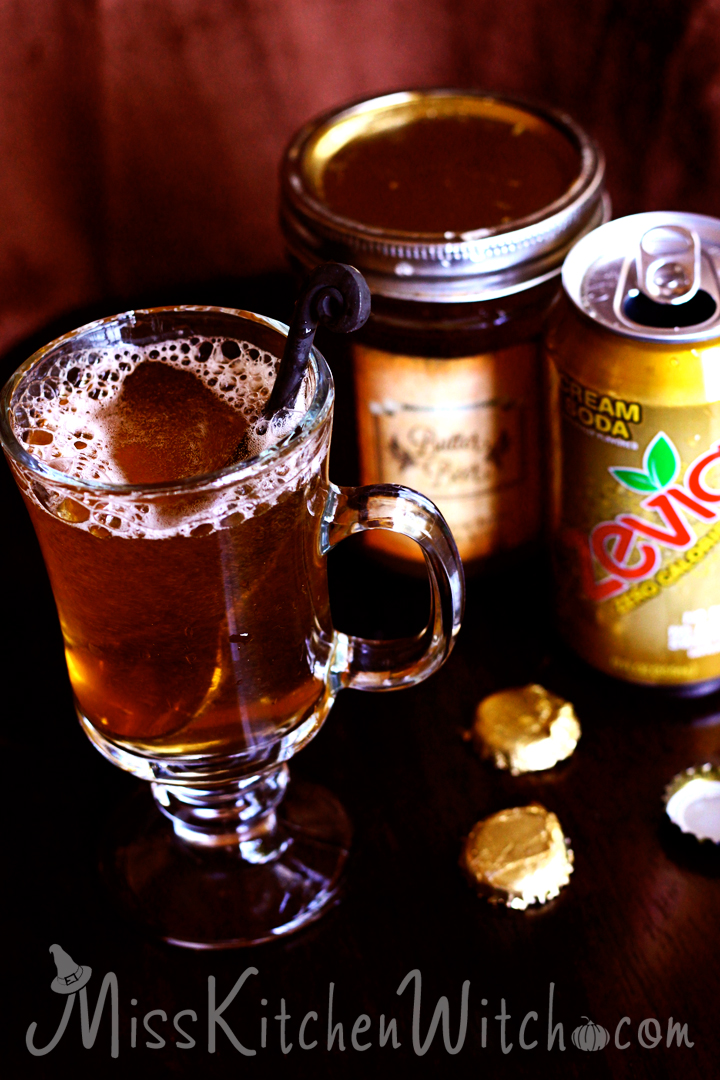 Split a can of Zevia between two glasses, add a shot of Toasted Marshmallow Vodka, and a pinch of salt to each and stir. Top up with the scotch ale. If adding some foam, mix a few spoonfuls of ale into whichever whipped topping you decided on and drop it gently on the top of your drink. Enjoy responsibly and keep away from children and house elves.