Chocolate Frogs are little enchanted frog-shaped candies sold in the wizarding world, produced by Mr. and Mrs. Flume’s (candy company?). Each is packaged with a removable card featuring a famous witch or wizard for trading and collecting. The frogs are said to be made of seventy percent Croakoa—presumably what allows them to jump and move like an actual frog or perhaps that makes them taste like frogs… You’ll see chocolate frogs throughout the books being eaten and played with by the students, given as gifts, and even used as recovery aids by professors after encountering dementors. 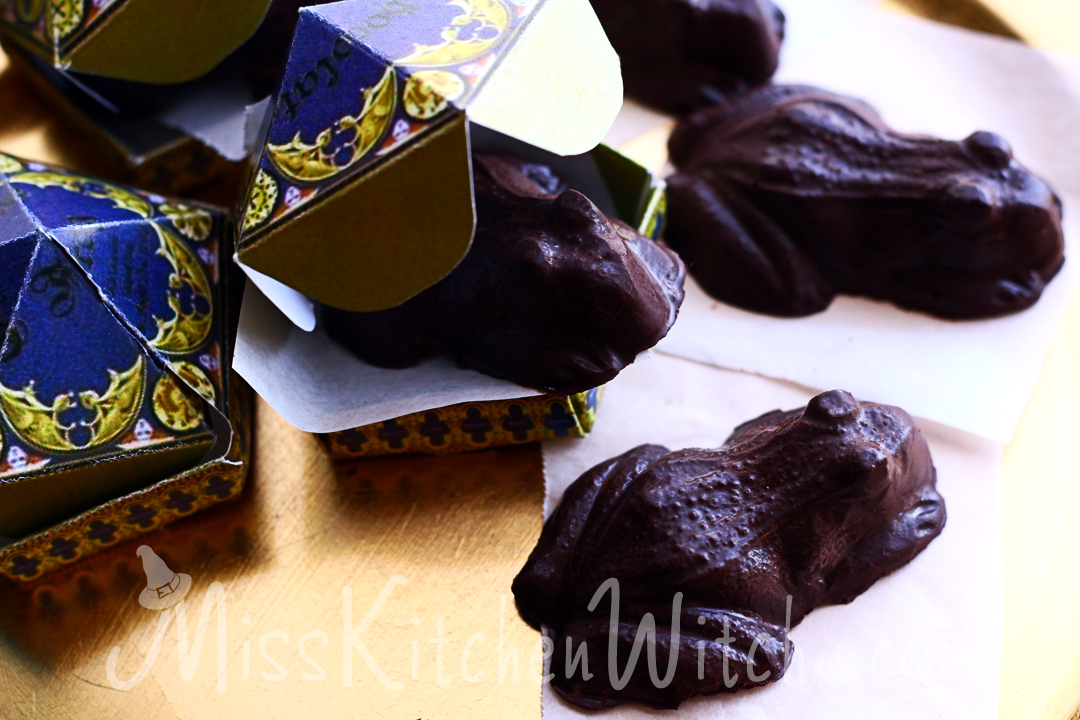 “What are these? Harry asked Ron, holding up a pack of Chocolate Frogs. “They’re not really frogs, are they?” He was starting to feel that nothing would surprise him.

“Oh, of course, you wouldn’t know—Chocolate Frogs have cards inside them, you know, to collect—famous witches and wizards. I’ve got about five hundred, but I haven’t got Agrippa or Ptolemy.” 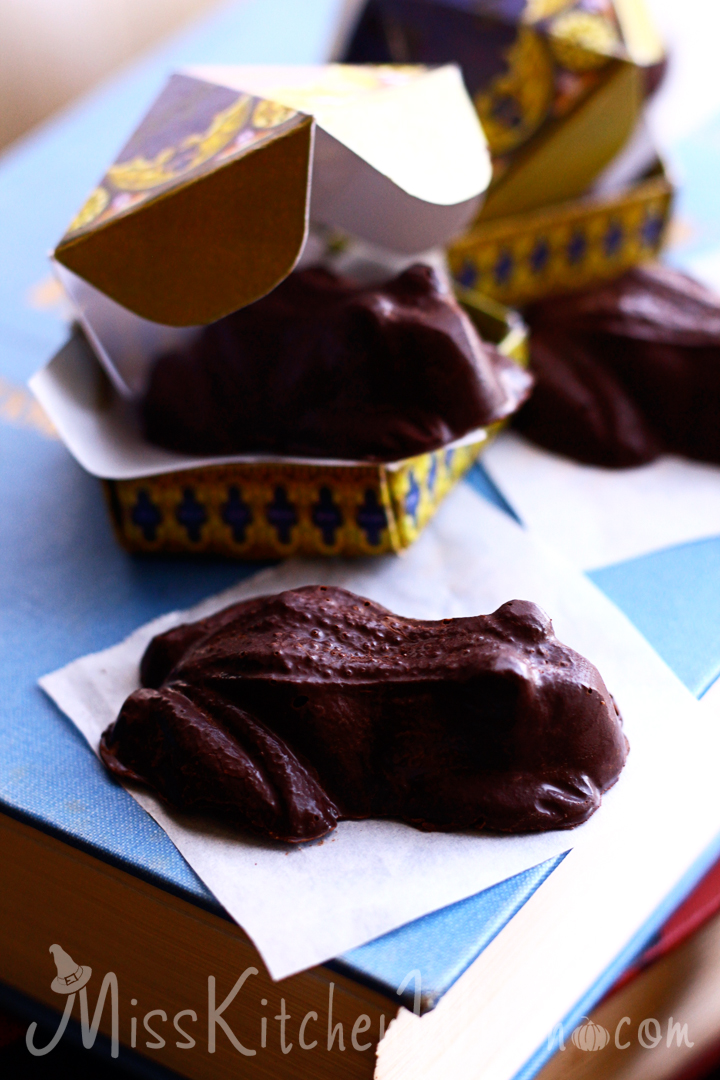 Neville’s lips twitched in a weak smile as he unwrapped the frog.

“Thanks, Harry… I think I’ll go to bed…. D’you want the card, you collect them don’t you?”

As Neville walked away, Harry looked at the Famous Wizard card.

“Dumbledore again,” he said, “He was the first one I ever—”

He gasped. He stared at the back of the card. Then looked up at Ron and Hermione.

“I’ve found him!” he whispered. “I’ve found Flamel! I told you I’d read that name somewhere before, I read it on the train coming here—listen to this: ‘Dumbledore is particularly famous for his defeat of the dark wizard Grindelwald in 1945, for the discovery of the twelve uses of dragon’s blood, and his work on alchemy with his partner, Nicolas Flamel’!”

In our muggle world, Chocolate Frogs are a candy mass produced by Hasbro and obviously contain dairy. I purchased my own chocolate frog mold for a few dollars on Etsy in anticipation of my Harry Potter Vegan Month of Food and used a dark, free-trade chocolate. The Hasbro chocolates are solid, but I decided to fill mine with peanut butter. 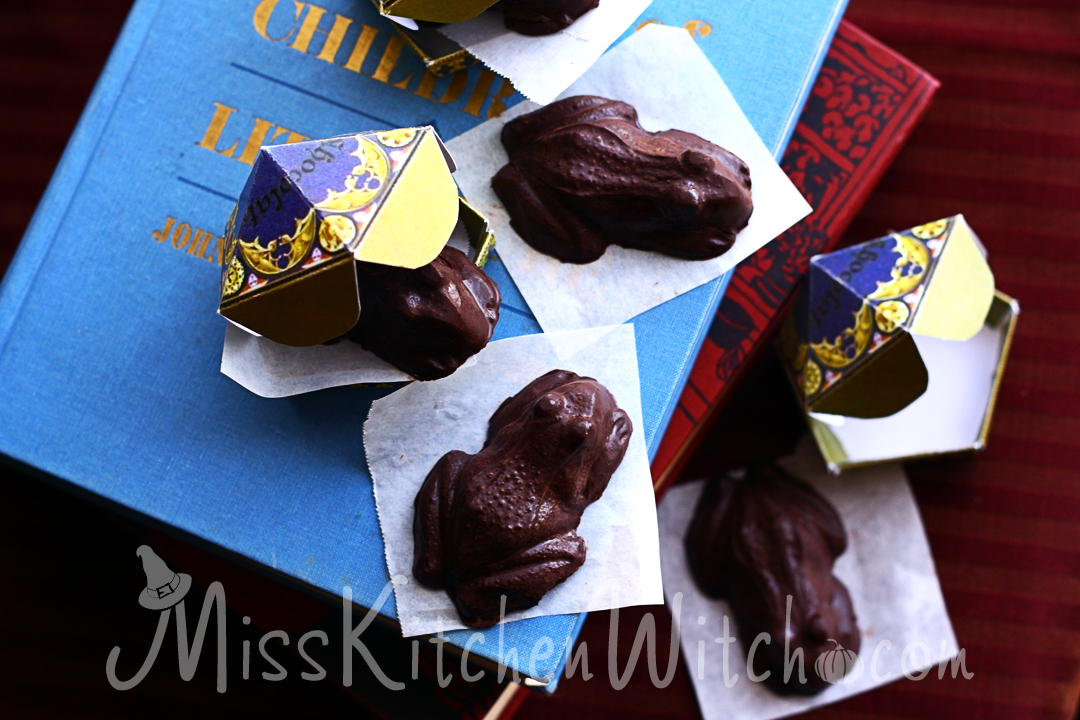 Mix the peanut butter, sugar, and vanilla in a small bowl and set aside. 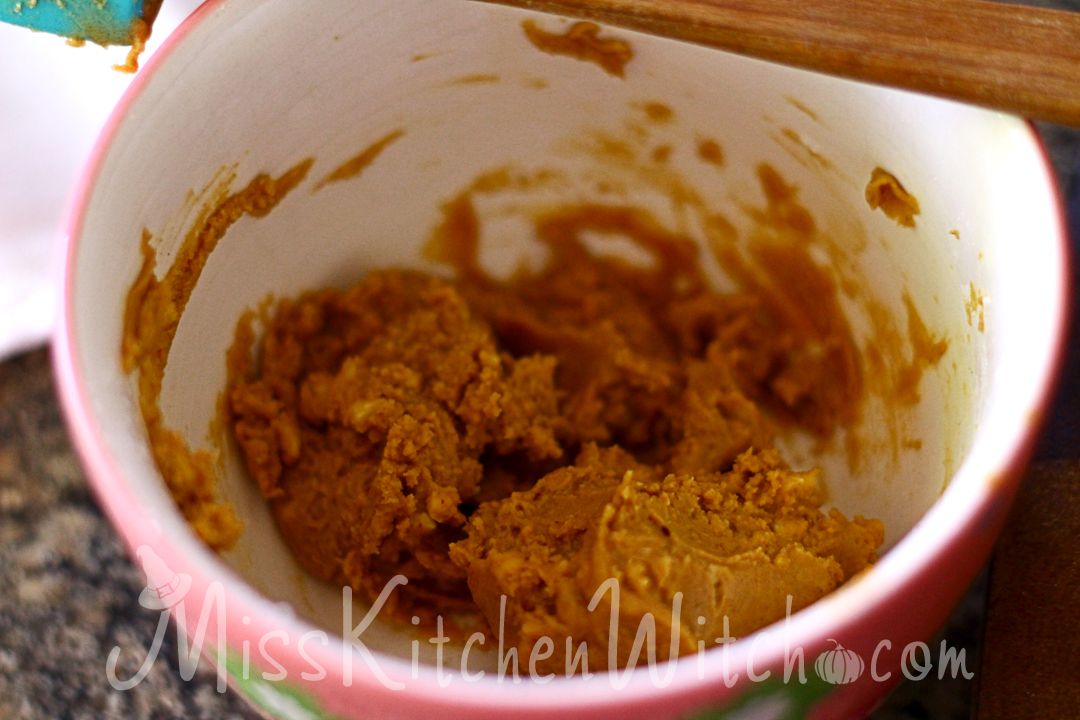 Heat the chocolate in a double boiler until it is glossy, but still has some sizable chocolate chunks. Using a candy thermometer, you want to raise it to 115°F and NO HIGHER than 120°F—or you’ll have to let it cool completely and start over. 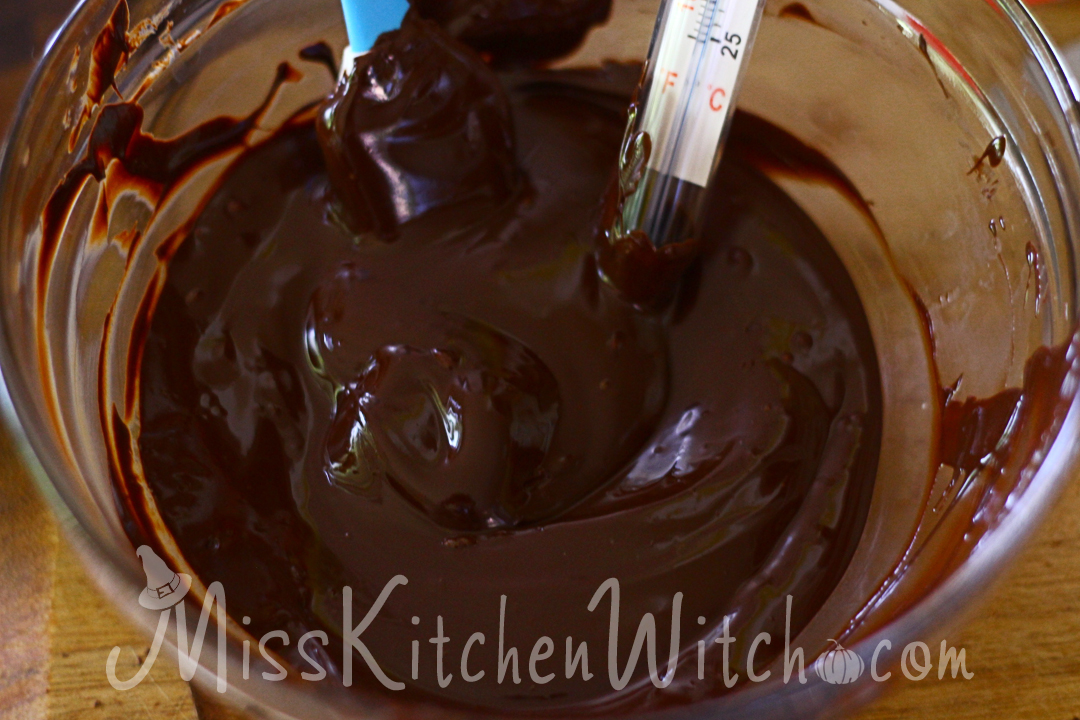 Drop in a chunk of unmelted chocolate, remove the pan or bowl from the heat and bottom boiler. Stir mixture frequently. Watch the temperature, you want it to come down between 87°-90°F, but NO lower. Otherwise, you’ll have to reheat it again. (tempering chocolate is a tricky business). 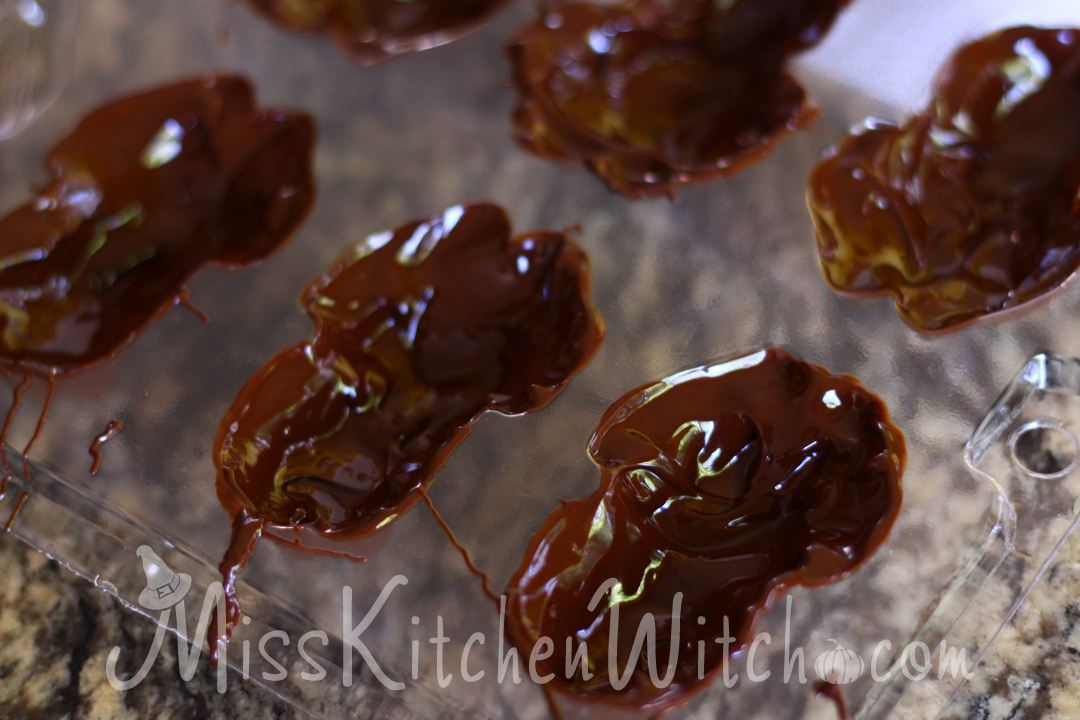 Once you’ve got it at the right temperature, pour a spoonful into each mold and spread around. Making sure to get in all the nooks and crannies. Let cool and harden for a few minutes. You might want to place your remaining chocolate over the hot water again briefly, just to keep it between 87°—90°. 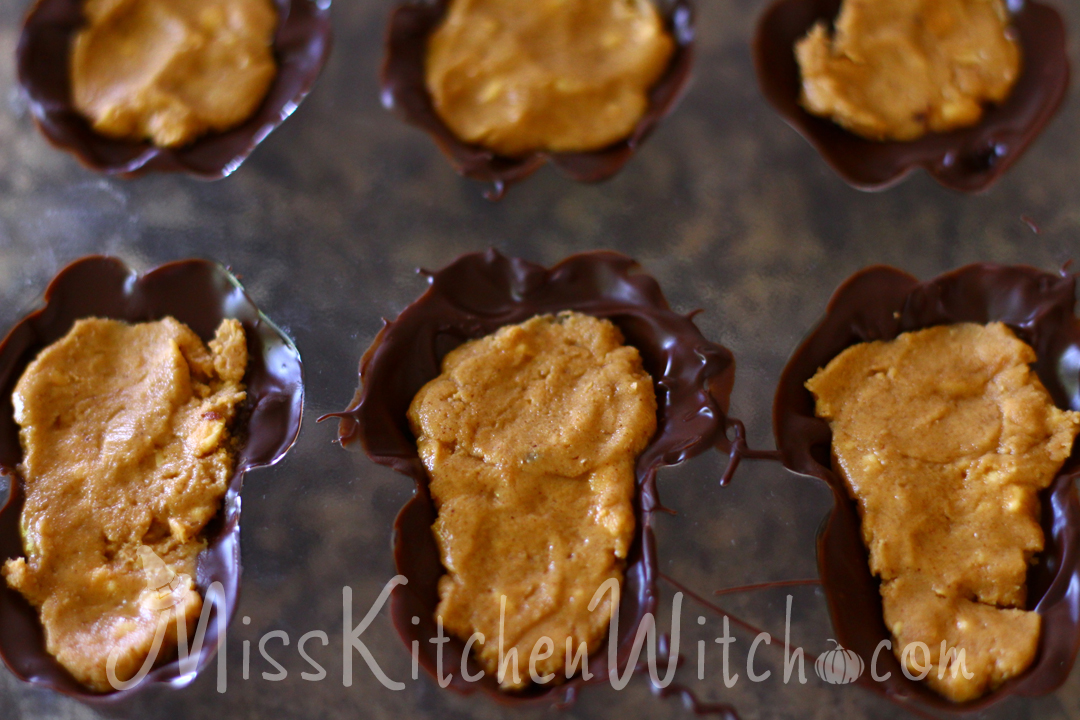 Roll a glob of the peanut butter mix into a little log and gently press in to the chocolate shell you’ve made in the mold. Make sure none of it is higher than the edge of the mold and that there is enough space to cover it with more chocolate. Once all the molds are filled with peanut butter, cover each with the remaining chocolate and scrape the excess off with a knife for a smooth bottom. 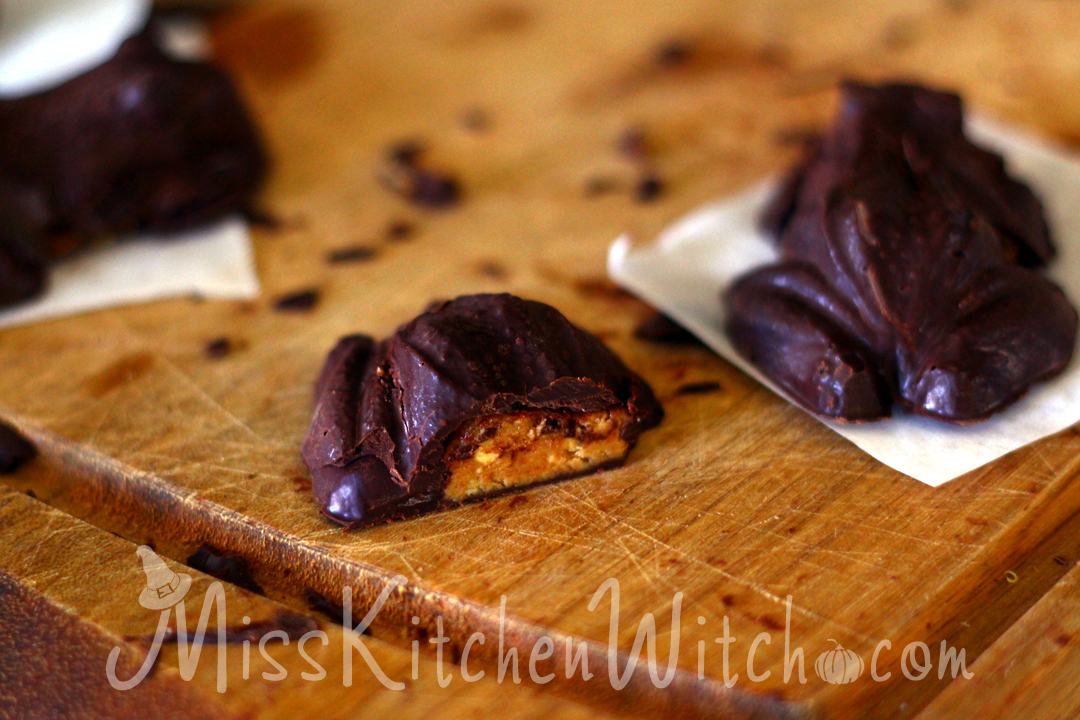 Let sit for a good 30 minutes to finish cooling and hardening. Pop the chocolates out of the mold and clean off the edges if needed. If you were successful in tempering your chocolate, it should be shiny and give a nice *snap* when bitten. 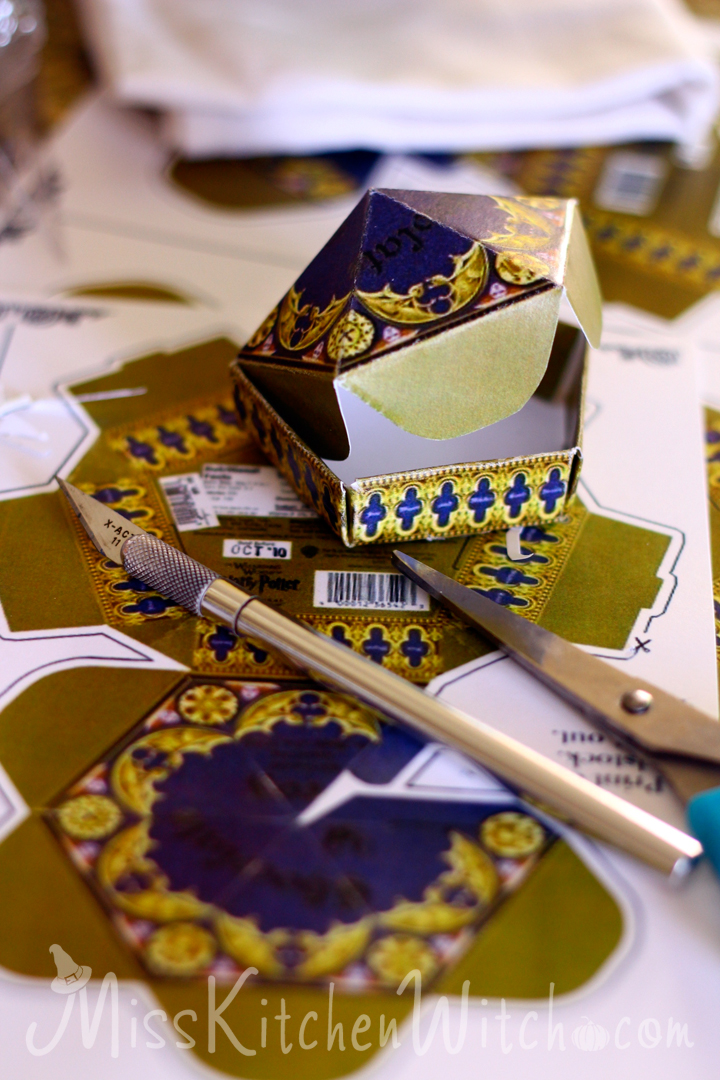 I printed out my boxes on cardstock from this DIY printable. They were a little too small, so make sure to print larger than 100%. Gift and enjoy— and if you really want to go all out, there are tons of fans that also make printable collectable Wizard Cards too!