Through the darkness of future past
The magician longs to see.
One chants out between two worlds
Fire walk with me. 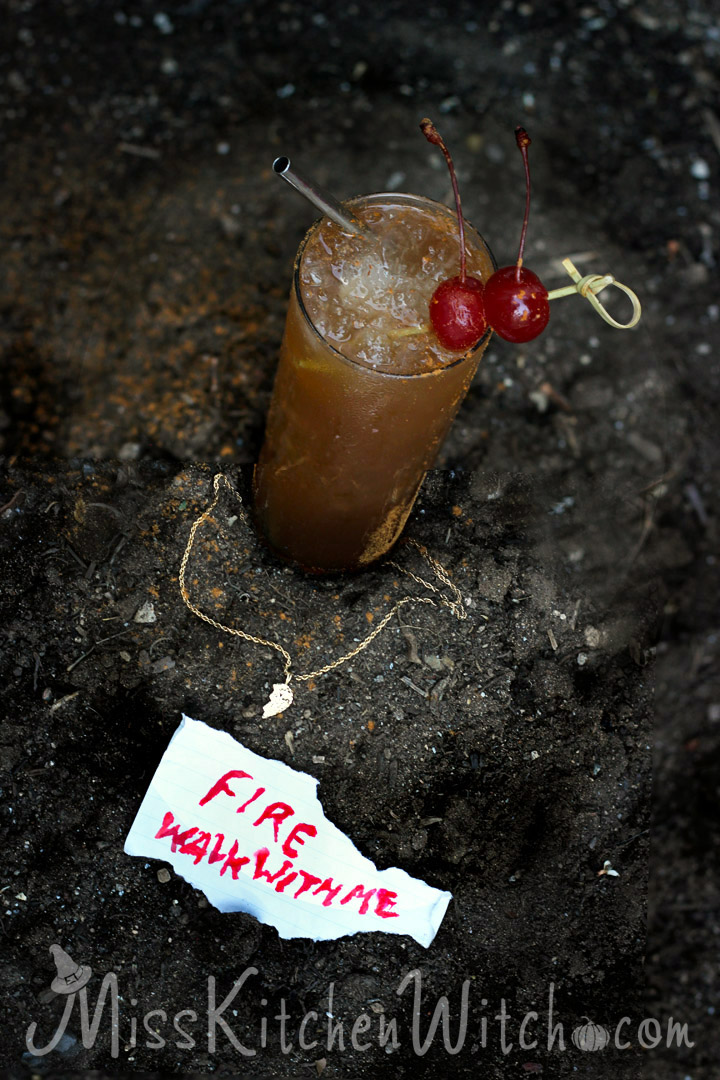 The poem recited in Agent Cooper’s dream, by Mike, and Bob seems to be an evil incantation that (I believe) allows entities to move about from the black lodge to our human plane or indicates such movement. A fragment of this poem, the last words “fire walk with me”, was found written in blood along with Laura’s gold necklace at the train car where she was killed by BOB.

Twin Peaks: Fire Walk With Me is also the title of David Lynch’s 1992 film, both a prequel and epilogue to the story of Laura Palmer. I had been a TP fan years before watching FWWM. We caught it at a midnight screening in Hollywood as part of a Lynch marathon, an utterly exhausting affair. The film is pretty horrifying compared to the old censored show. The film let out after 2am and we had an hour drive to get home. 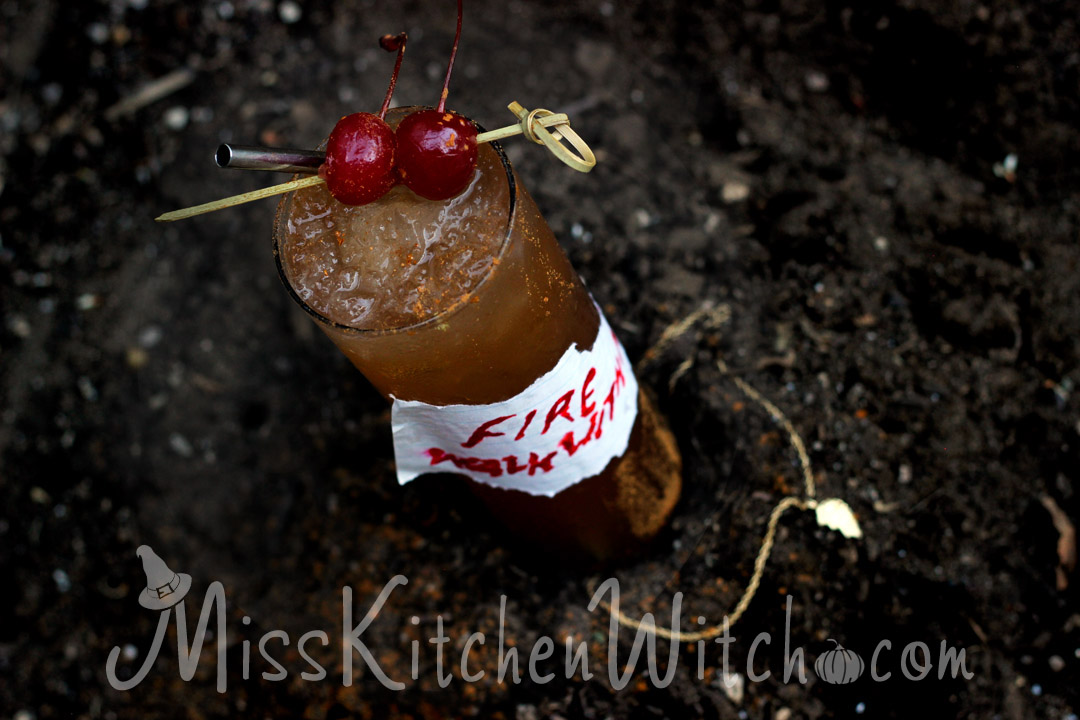 Driving through LA in the middle of the night is weird anyway, its a total ghost town and there aren’t any cars on the streets or freeways. Finally, when we were almost home we hit a patch of freeway construction—but no workers in sight. They shut down every exit for 10 miles and we had to keep going until we finally got an exit in the next city, then turned around and took surface back. It sounds silly now, but at the time—after 6+ hours of David Lynch films, culminating with the cackling BOB and very little sleep, we were pretty freaked out, expecting BOB to jump out at every turn.

I tried to turn that fear into something a little more enjoyable, a cocktail or as some may call it—repression. Taking on the fire imagery, this drink has some heat, a lot of alcohol, and a little bit of the green fairy. Based on the original Zombie cocktail, it’s good to set a limit on these suckers, otherwise you might find yourself stumbling between two worlds. 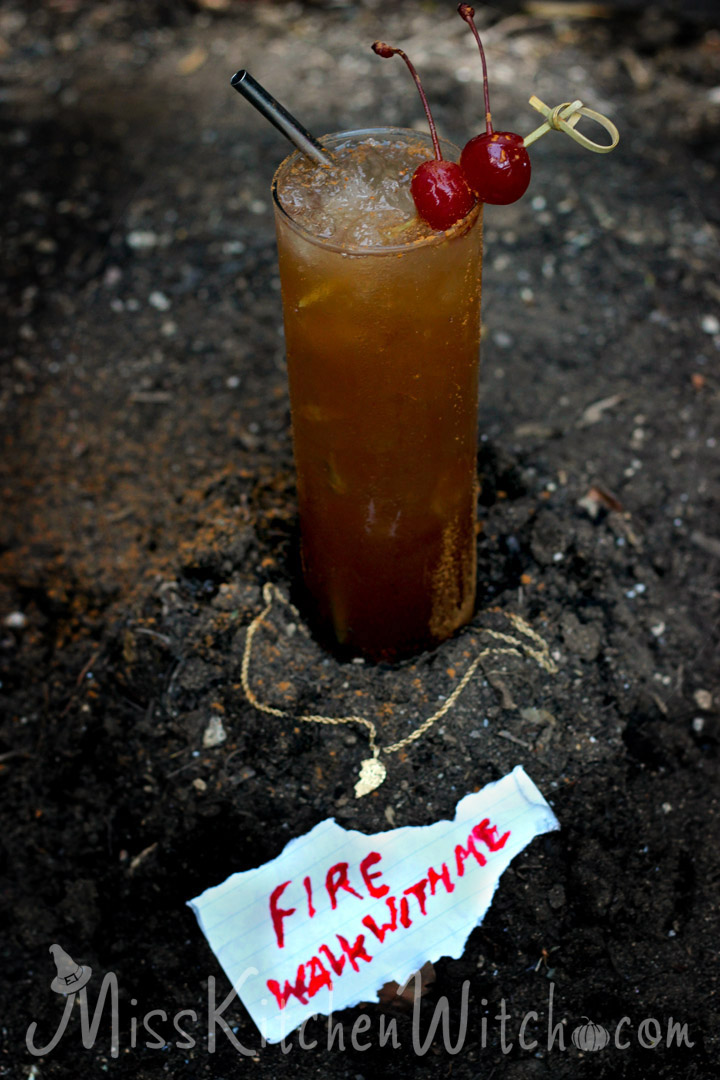 Fire Walk With Me (serves 1)

Add the agave, juices, and a small slice or 2 of serrano to a cocktail mixer. Smash the pepper with a cocktail muddler to release the oils. 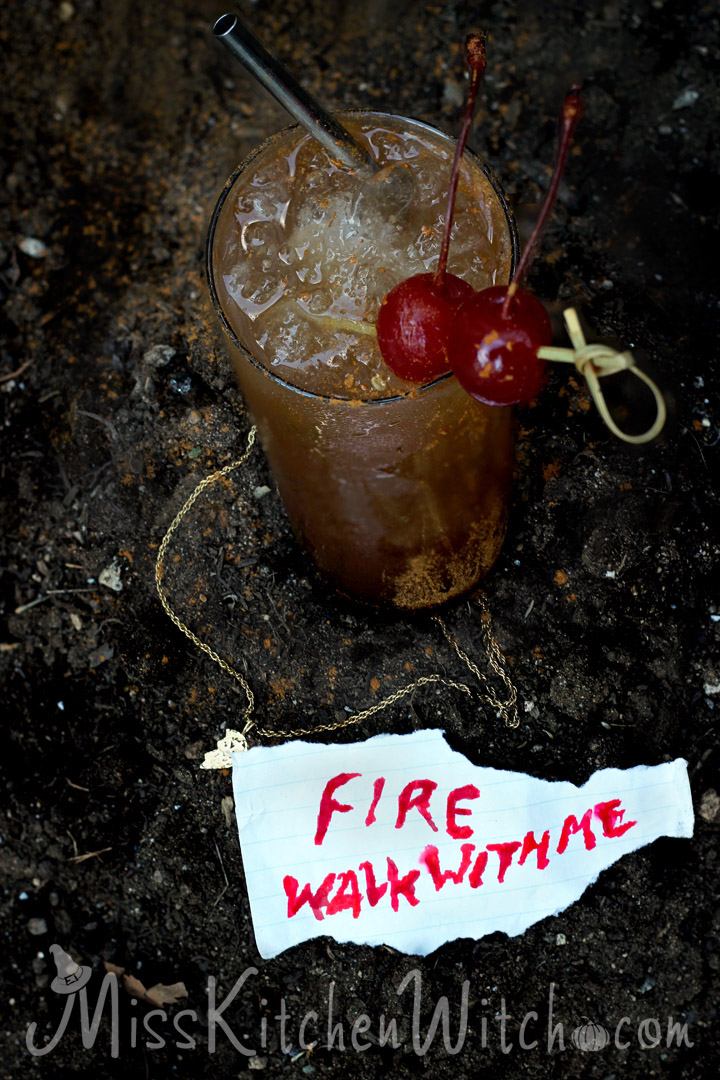 Add the remaining cocktail ingredients and shake with 1/2 cup ice. Shake and then strain into a tall glass filled with crushed ice. Top with more ice if needed and garnish. Sprinkle with cinnamon and cayenne if you like even more heat.

To set on fire, place the spent lime shell on top the ice. As a flame source you can use a sugar cube of small square of bread soaked in 151 or lemon extract (yes, the baking extract). Then, when it is ready to serve, place the cube in the lime and carefully light aflame. Obviously, blow out the flame before taking a swig.