According to some Harry Potter marketing materials, Pumpkin juice has been “[m]anufactured since 1837 by London Pumpkins & Sons” and it is extremely popular among wizards and the students of Hogwarts. It is featured at most meals in Hogwarts by the pitcherful. I’d think that with the size of the kitchens in Hogwarts, the house elves must outsource some of that work and bring in London Pumpink & Sons juice. 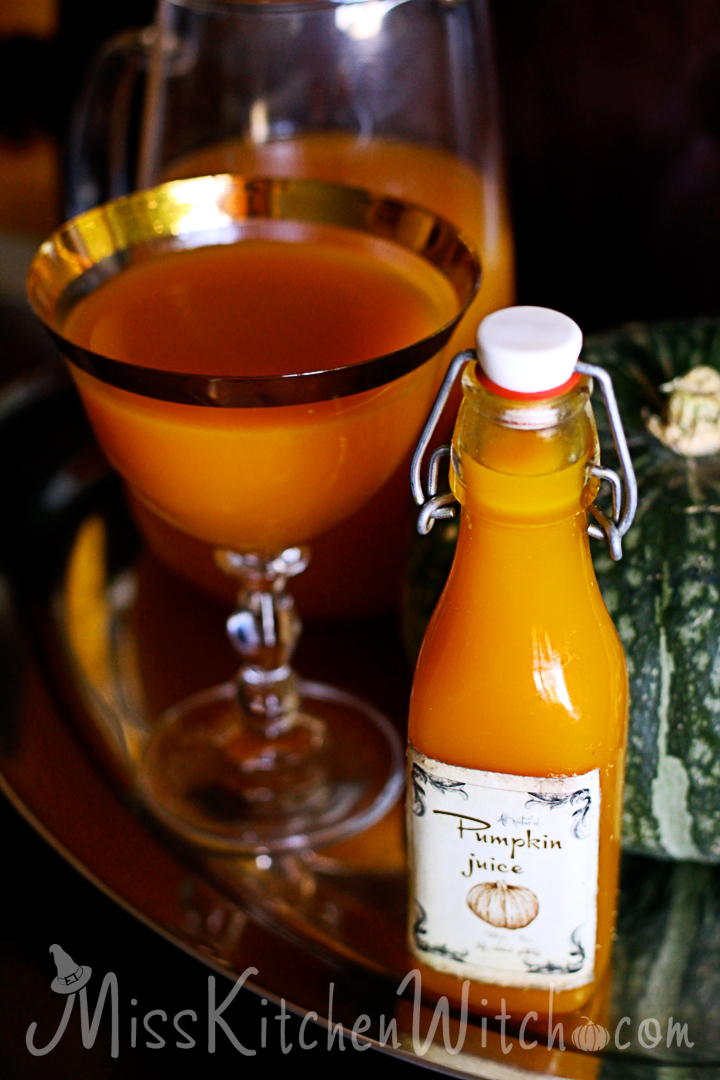 Pumpkin juice is exactly what it sounds like, a beverage made from pumpkins. Though you wouldn’t know it from the recipes online. Most are apple or pineapple juice with the addition of pumpkin pie spice. That’s cider, not pumpkin juice. Even at The Wizarding World of Harry Potter in Florida, their number one ingredient in pumpkin juice is ‘apple juice concentrate’. And why is that? Pumpkin juice tastes awful. So, it’s unlikely that pumpkin juice was ever straight up juice from a pumpkin. Raw pumpkin is actually quite dry, the moisture held in until cooked.

Some recipes have a little pumpkin in them, but it appears Bryton Taylor over at Food in Lit has cracked the Orlando theme park’s recipe—with apple juice, but also pumpkin, apricot nector, spices, and vanilla. I’ve never been to the Harry Potter theme park, but I wanted to try my hand at it and see if I couldn’t improve it and up the pumpkin. 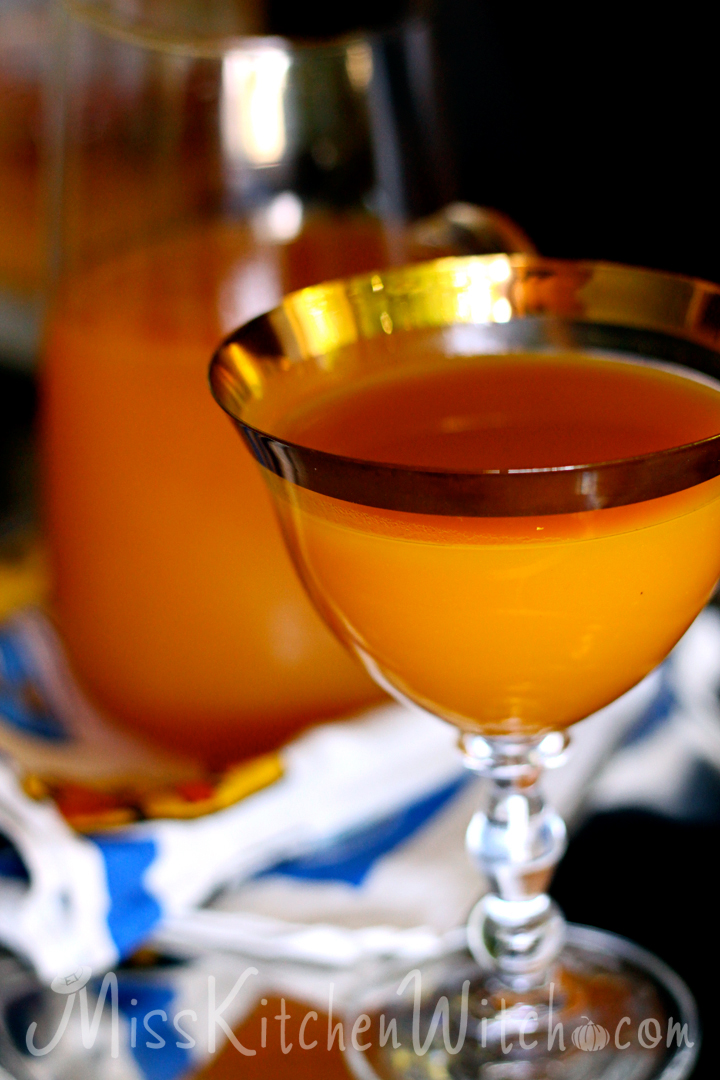 Harry starts to fantasize about cold pumpkin juice on the long flying car ride to Hogwarts.

Several uneventful hours later, however, Harry had to admit that some of the fun was wearing off. The toffees had made them extremely thirsty and they had nothing to drink. He and Ron had pulled off their sweaters, but Harry’s T-shirt was sticking to the back of his seat and his glasses kept sliding down to the end of his sweaty nose. He had stopped noticing the fantastic cloud shapes now and was thinking longingly of the train miles below, where you could buy ice-cold pumpkin juice from a trolley pushed by a plump witch. Why hadn’t they been able to get onto platform nine and three-quarters?” 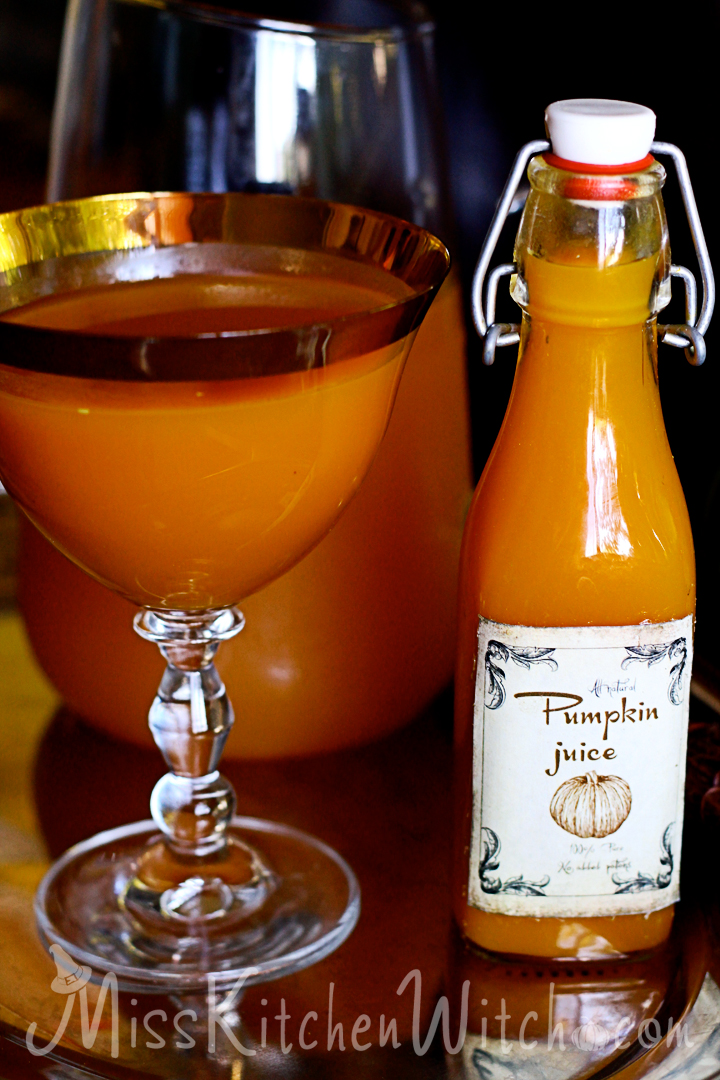 Preheat oven to 400°F. Halve and seed the pumpkin. Place it cut side down on a baking sheet, adding a few cups of water to the pan. Roast for about 45-50 minutes or until the pumpkin is buttery soft. You may need to add more water to the pan during the roasting. 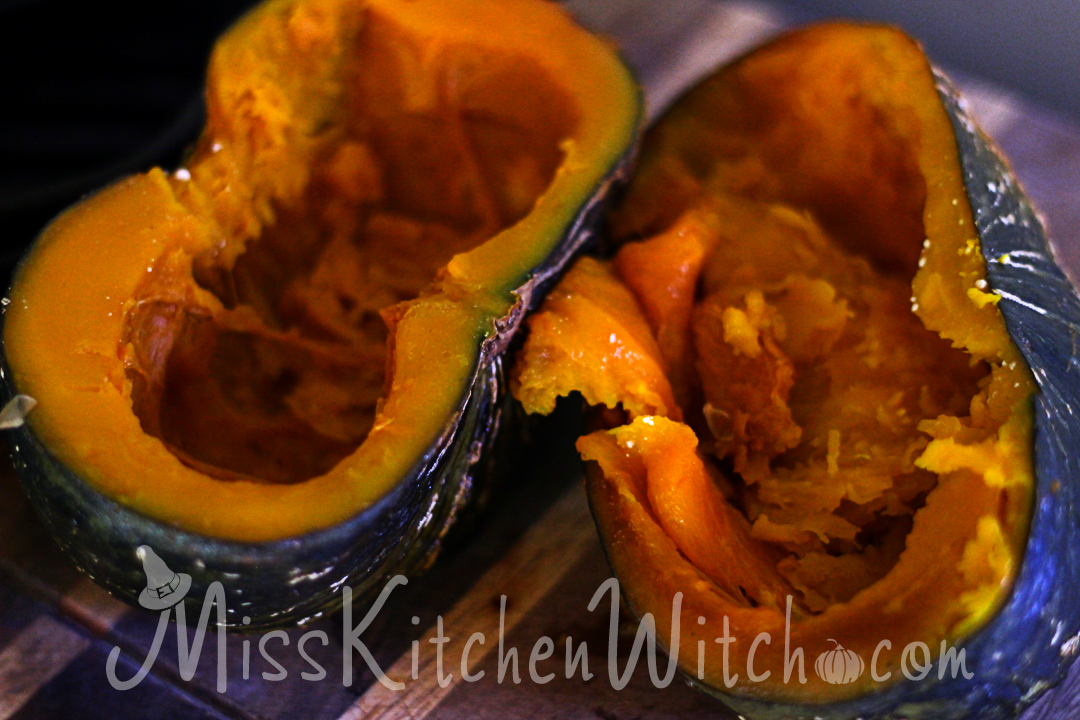 Remove from oven, cool and scoop out the inner cooked flesh. Combine the pumpkin and 2 cups of water in a blender and process until smooth. 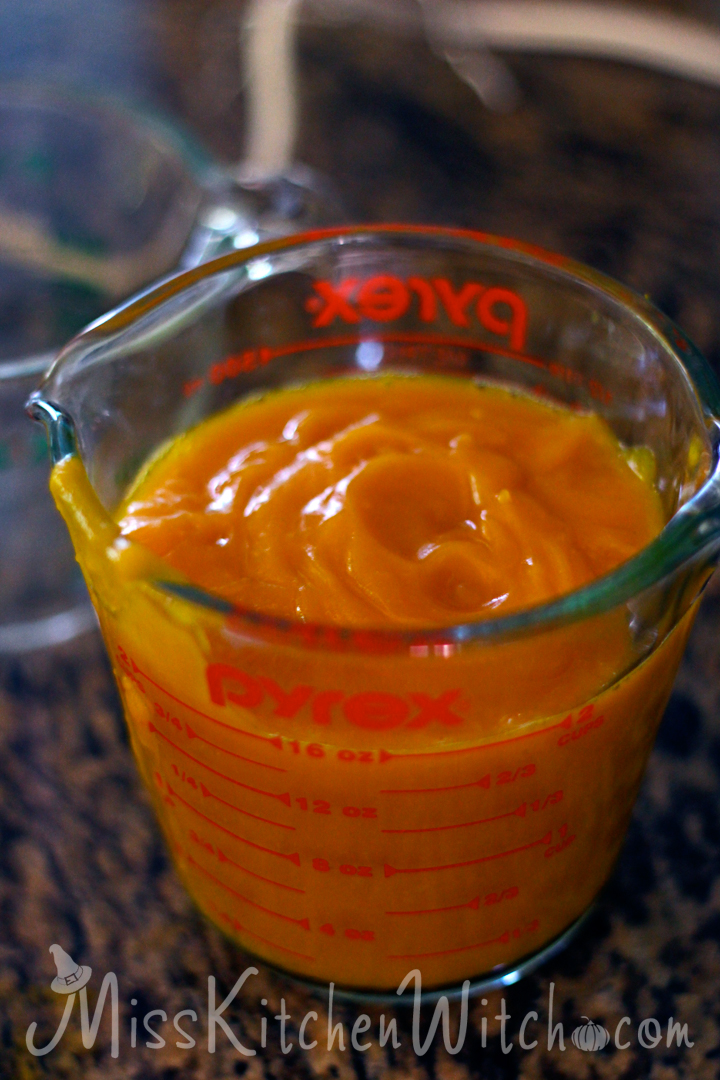 You should have about 5 cups of pumpkin puree. 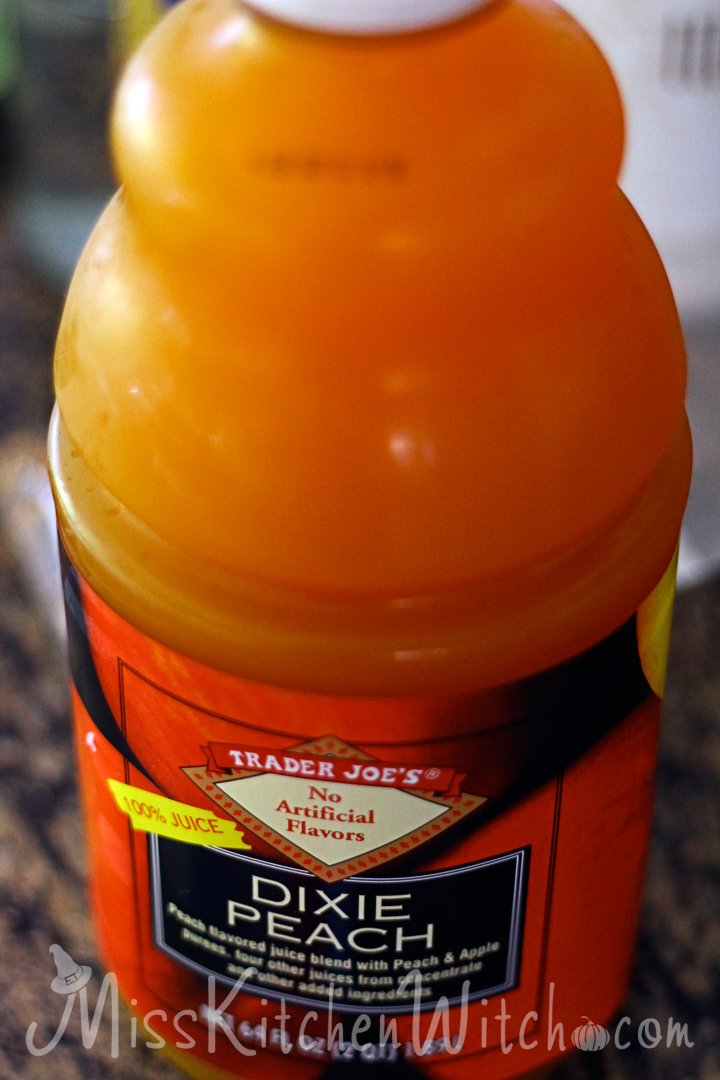 In a large sauce pot, combine the pumpkin juice, peach nectar, remaining water, sugar and mulling spices. Bring to a boil then reduce to a simmer for 30-40 minutes. Keep covered. 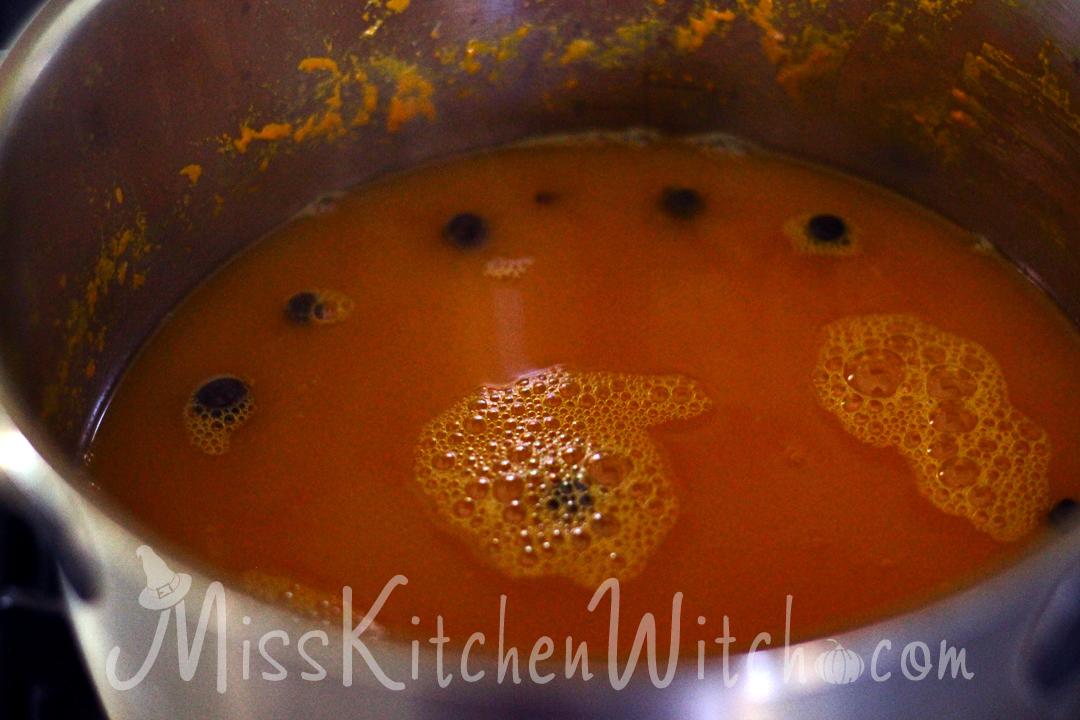 Remove from heat and add the vanilla extract. Taste test carefully and add a little more sweetener if you feel it needs it. Serve hot or chilled——even over ice. Delicious spiked with a bit of brandy! 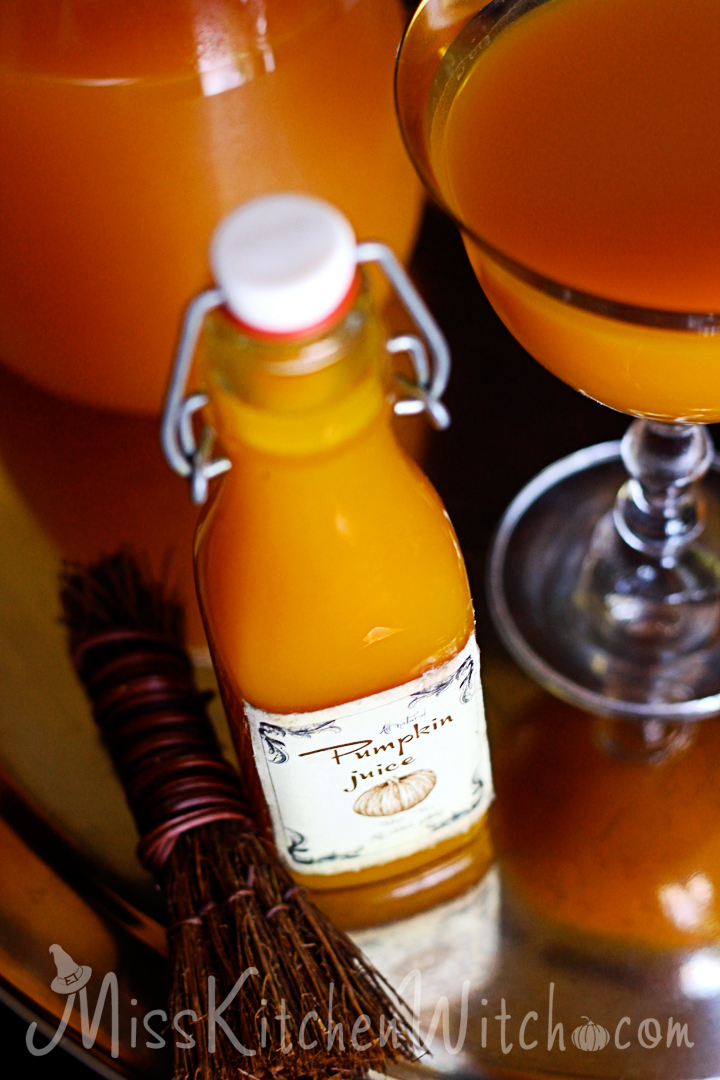 *Labels from Over the Big Moon