Treacle is a type of sugar syrup extracted during the refining process. It can refer to Golden Syrup (light treacle) or a dark treacle (closer to molasses). It is used in baking and even as a condiment, like drizzling over your pancakes. The flavor of golden syrup is that of very light molasses and maple syrup.

Rubeus Hagrid would make fudge out of treacle, and according to him, “gets rid o’ slugs in a jiffy“. Treacle fudge could also apparently be purchased at Honeydukes Sweetshop, in Hogsmeade. Hagrid first offers Harry and Hermione some of his Treacle Fudge while Ron waits out a backfired curse that leaves him puking up slugs. 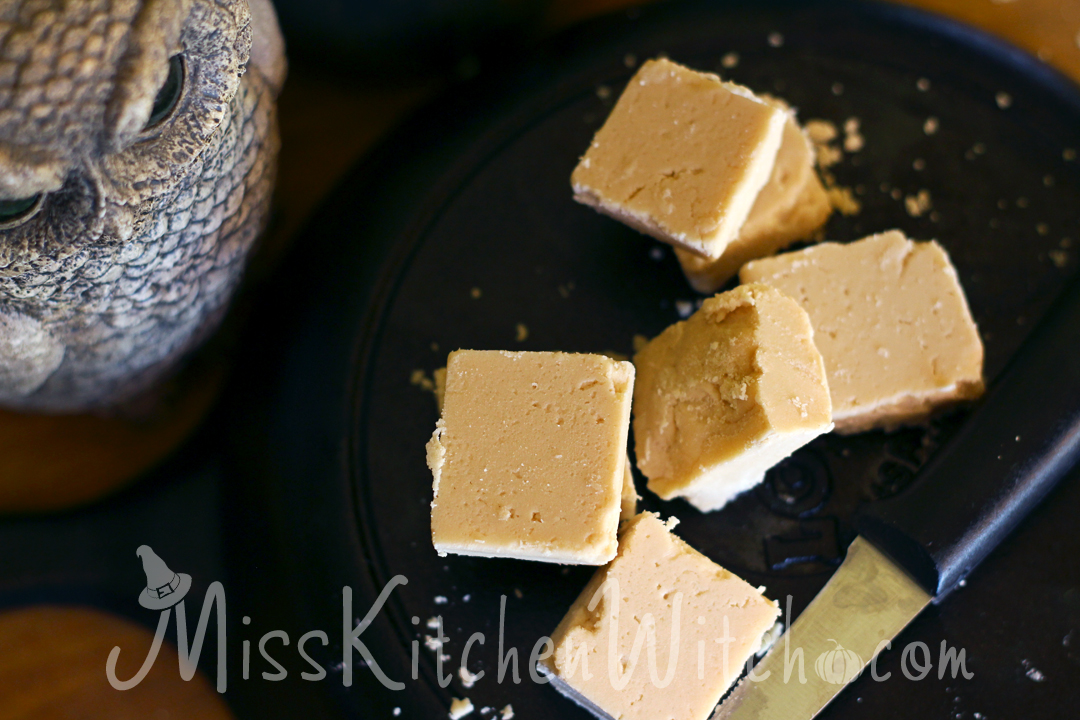 Harry would have pointed out that trouble didn’t come much worse than having slugs pouring out of your mouth, but he couldn’t; Hagrid’s treacle fudge had cemented his jaws together.

“Harry,” said Hagrid abruptly as though struck by a sudden thought.”Gotta bone ter pick with yeh. I’ve heard you’ve bin givin’ out signed photos. How come I haven’t got one?”

“I have not been giving out signed photos,” he said hotly. “If Lockhart’s still spreading that around—”

But then he saw that Hagrid was laughing.

“I’m on’y jokin’,” he said, patting Harry genially on the back and sending him face first into the table. “I knew yeh hadn’t really. I told Lockhart yeh didn’ need teh. Yer more famous than him without tryin’.”

“Bet he didn’t like that,”said Harry, sitting up and rubbing his chin.

“Don’ think he did,” said Hagrid, his eyes twinkling. “An’ then I told him I’d never read one o’ his books an’ he decided ter go. Treacle fudge, Ron?” he added as Ron reappeared.

“No thanks,” said Ron weakly. “Better not risk it.” 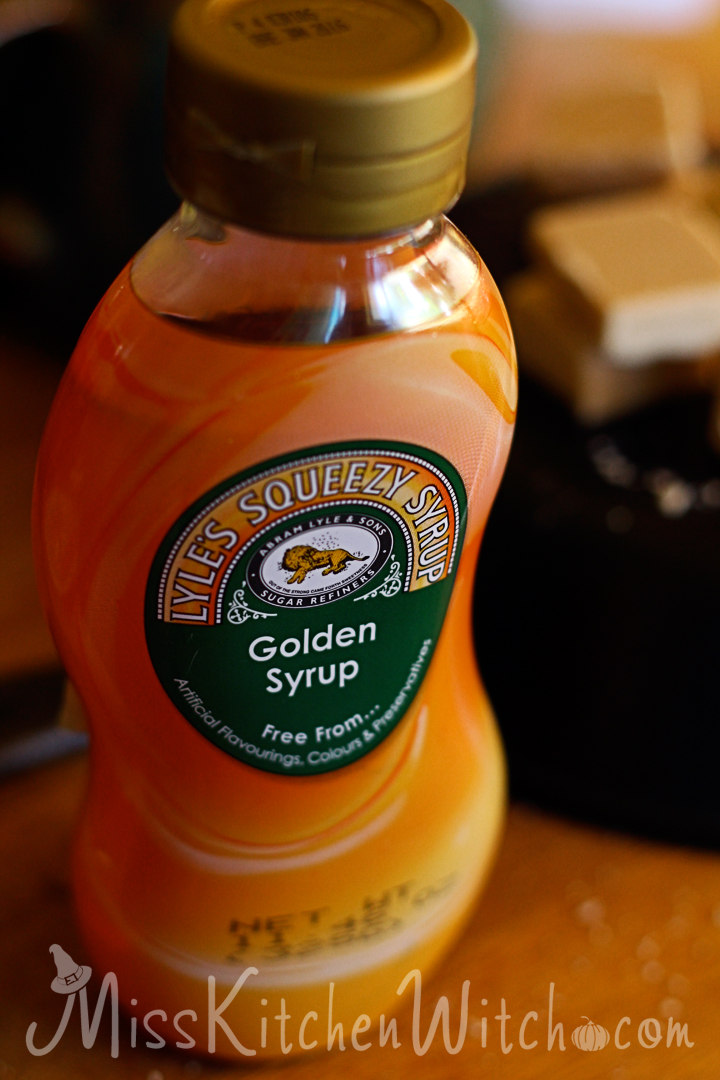 You will need a candy thermometer for this recipe, as well as some brand of golden syrup or light treacle. I found Lyle’s at Cost Plus World Market, but some super markets stock it in the international section. You can also try indian markets. It usually comes in a little tin, but the newer lines are in easy plastic squeeze bottles. This fudge recipe requires boiling the sugar up to a soft ball stage, which may seem difficult compared to other fudge recipes. Others use shortcuts by adding premade chocolate or marshmallow creme to set the fudge without cooking or beating. Be prepared because this is the traditional method for making fudge! 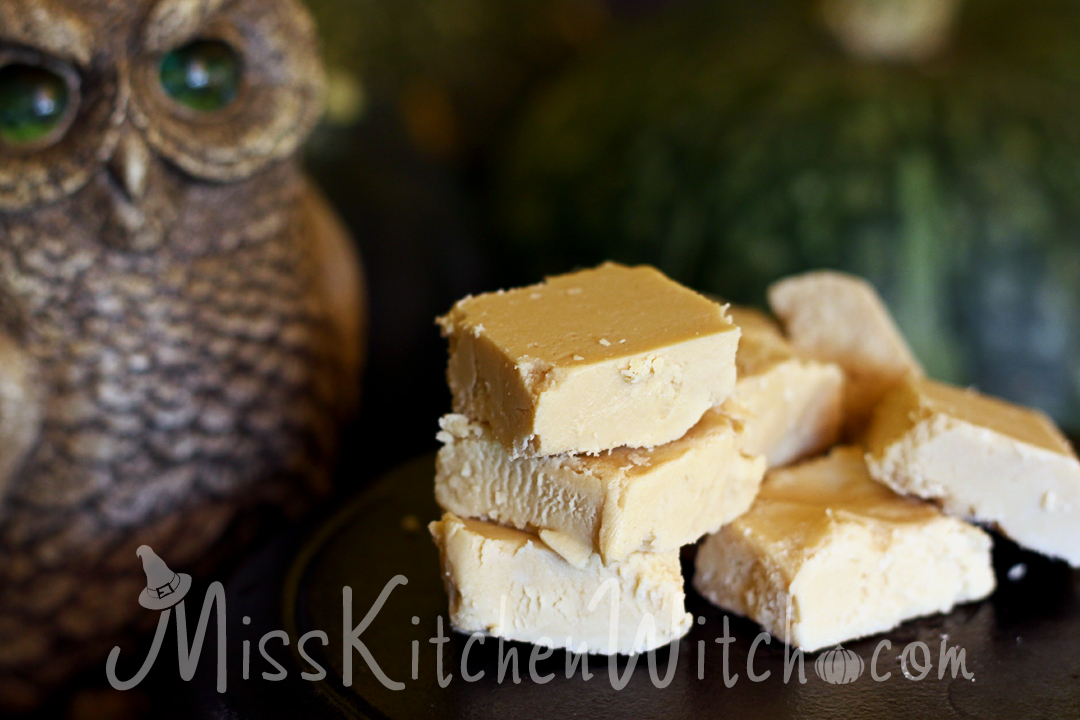 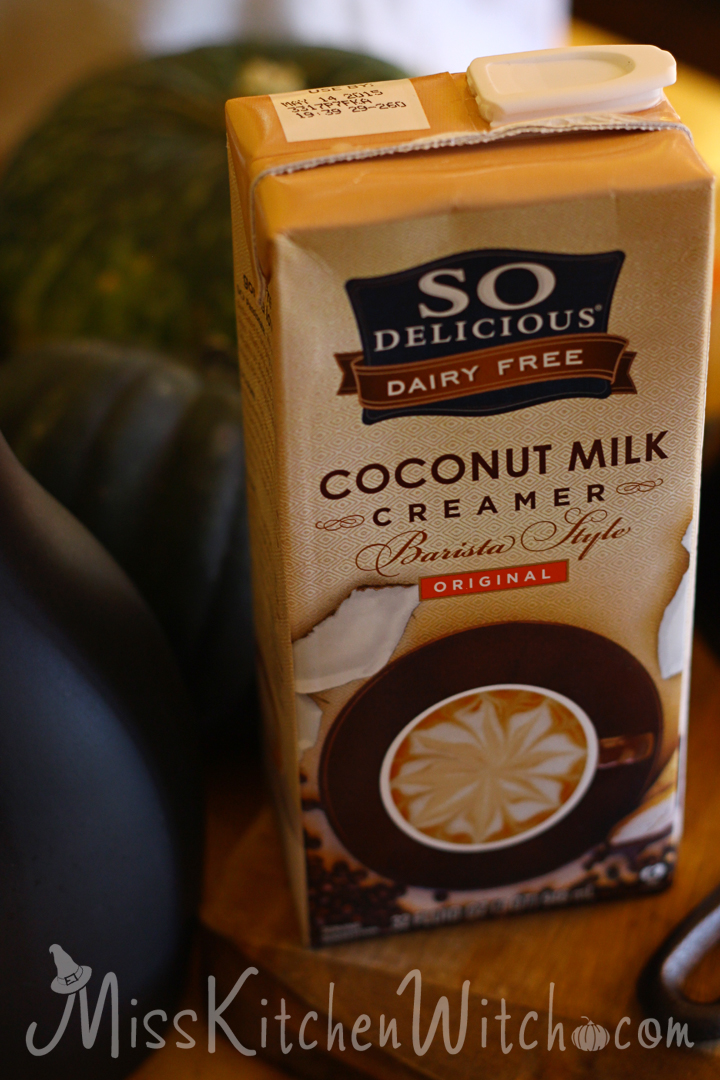 Grease  a square 6″-8″ pan (or line with parchment) and set aside. Combine the sugar and water in a sauce pot over low heat, stirring until sugar dissolves. 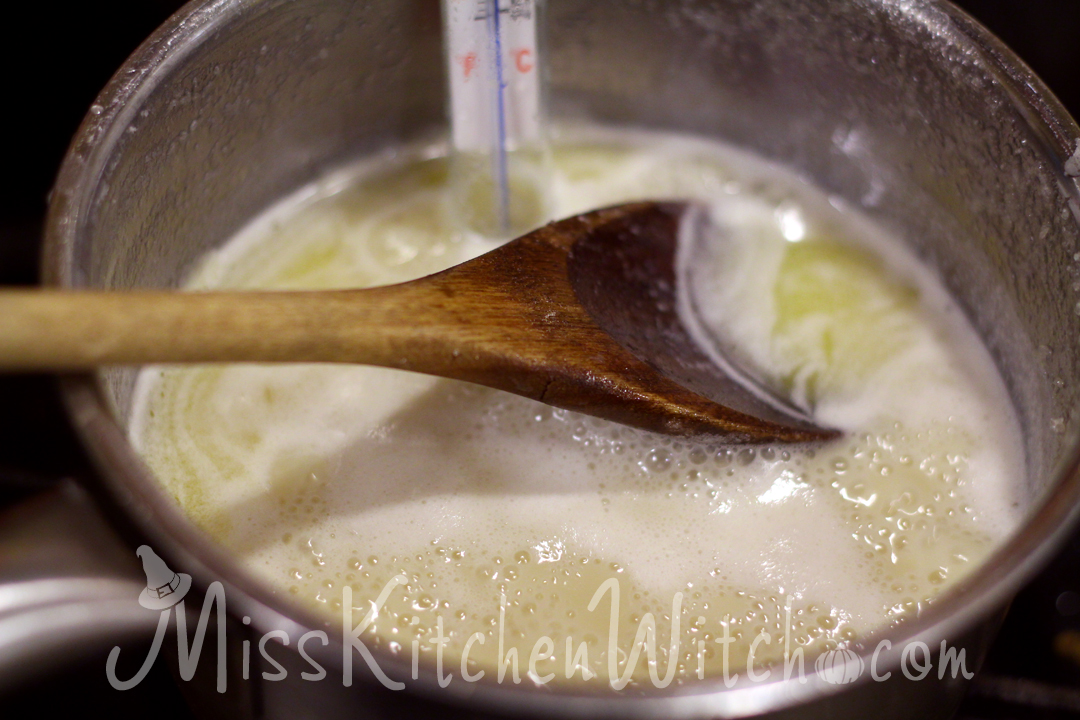 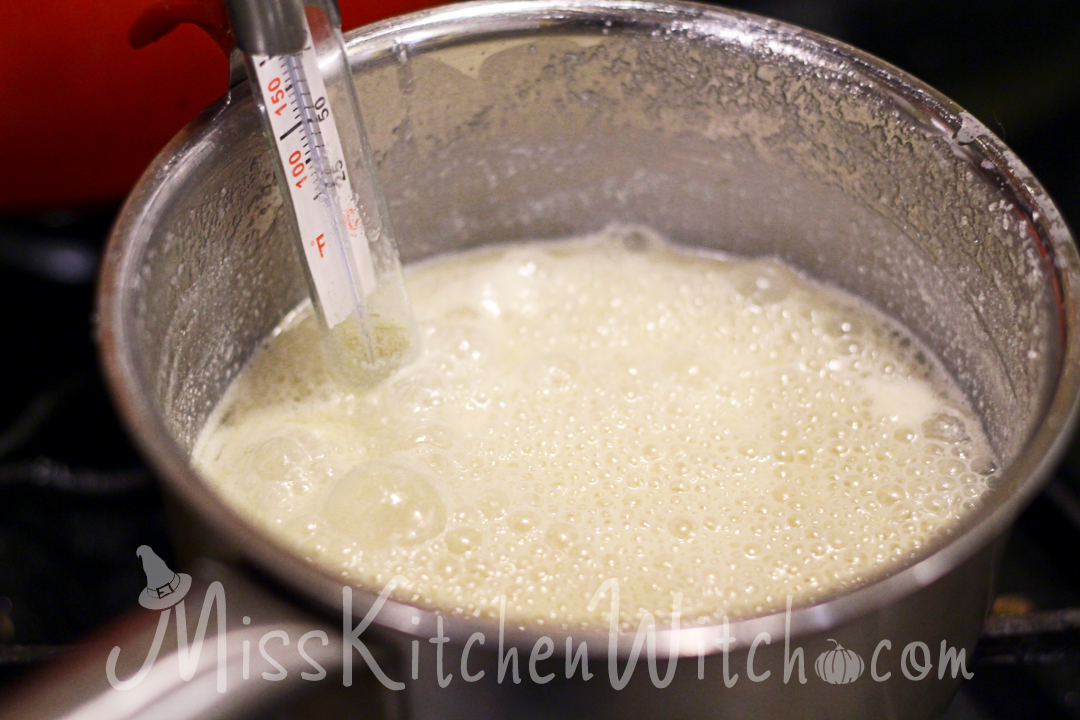 Keep at a low, steady boil and stir every 2 minutes or if it looks like it is about to boil up. Cook for about 20 minutes on low, watching the temperature. At first it may look like the cream is separating from the sugar and  like it’s slightly curdled, but don’t worry it will come back together as it becomes hotter. 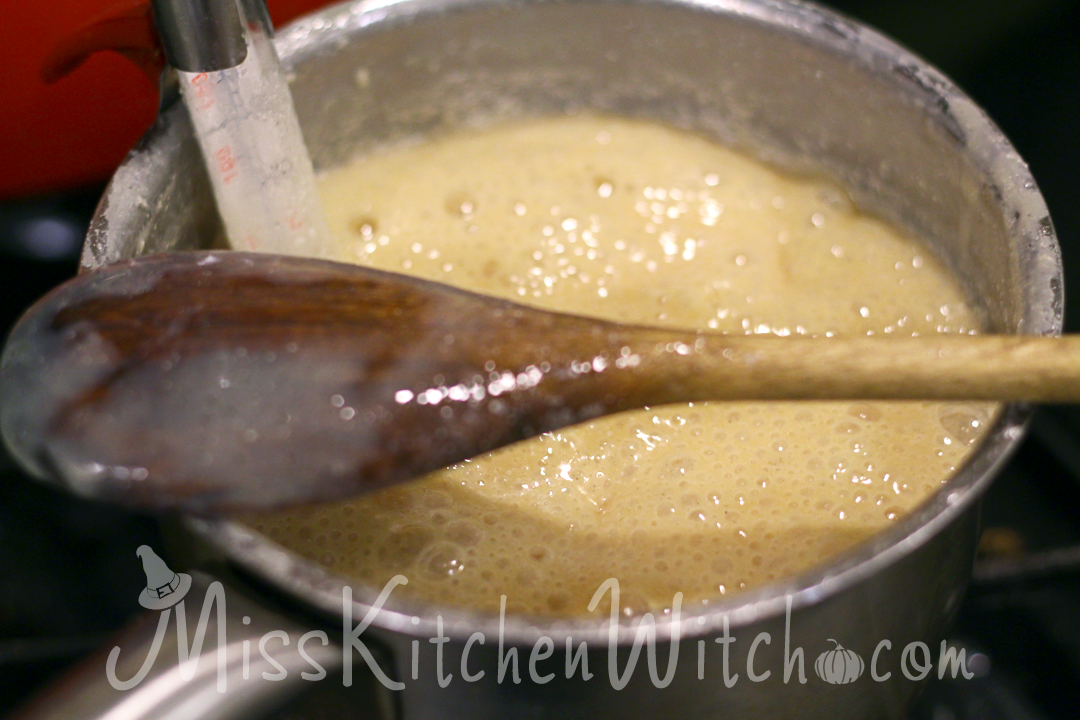 Once it reaches 240°F, remove from heat. It should be a light caramel color (think maple frosting on a donut or a light cappuccino). Add the vanilla and salt and beat the fudge mix with a wooden spoon for 5 mins, until it just starts to crystalize and looses its gloss. 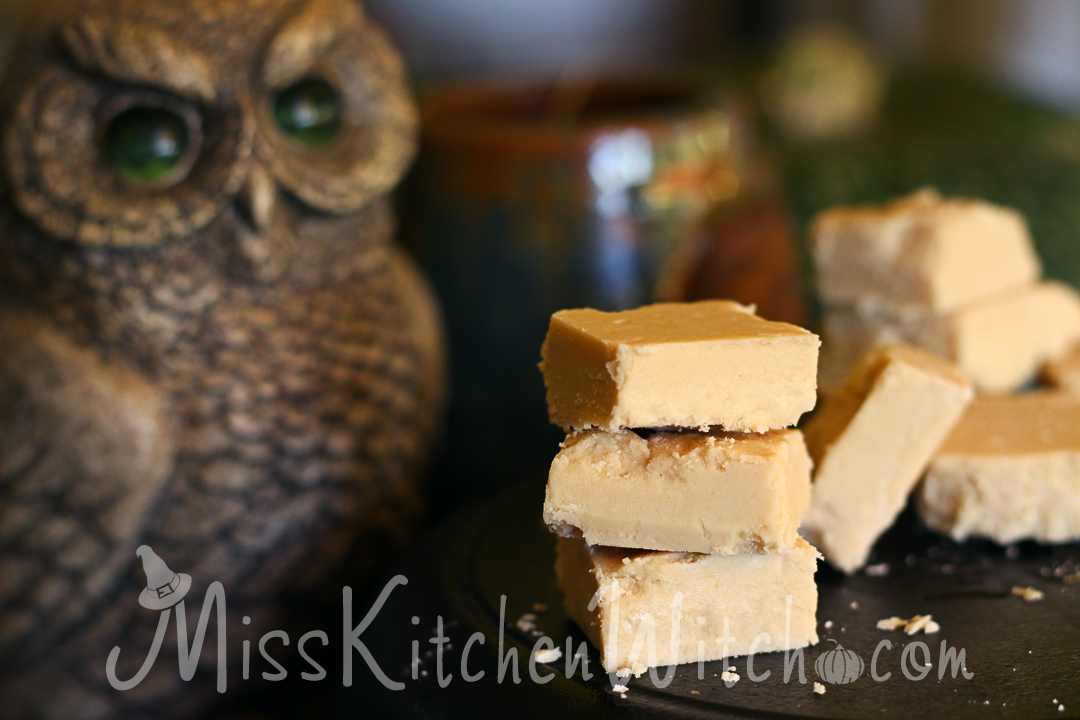 Quickly pack into your greased pan, press top smooth, and let cool completely. Cut into 1″ squares with a very sharp knife and serve. Keep in an airtight container when not serving, as it will get a bit crunchy on the outside when out. Texture should not be grainy, but like a melt-in-your-mouth halva.