Onion soup is a broth-soup made from caramelized onions, sherry, and (traditionally meat-based) broth.  It is usually served with bread and croutons where are placed on top and then browned under a broiler. I’ve replaced the sherry in this recipe with cognac, but if you prefer to leave the alcohol out just increase the vinegar by 2 tablespoons.

Harry, Ron, and Hermione enjoy some French Onion Soup at Grimwold Place prepared by the Black family’s House Elf, Kreacher. Kreacher was once horribly rotten to Harry and his friends, but after he came around the house was glistening and there was always a hot meal waiting.

Kreacher came bustling to the table with a large curcen in his hands, and ladled out soup into pristine bowls, whistling between his teeth as he did so.

“Thanks, Kreacher,” said Harry, flipping over the Prophet so as not to have to look at Snape’s face. “Well, at least we know exactly where Snape is now.”

He began to spoon soup into his mouth. The quality of Kreacher’s cooking had improved dramatically ever since he had been given Regulus’s locket: Today’s French onion was as good as Harry had ever tasted. 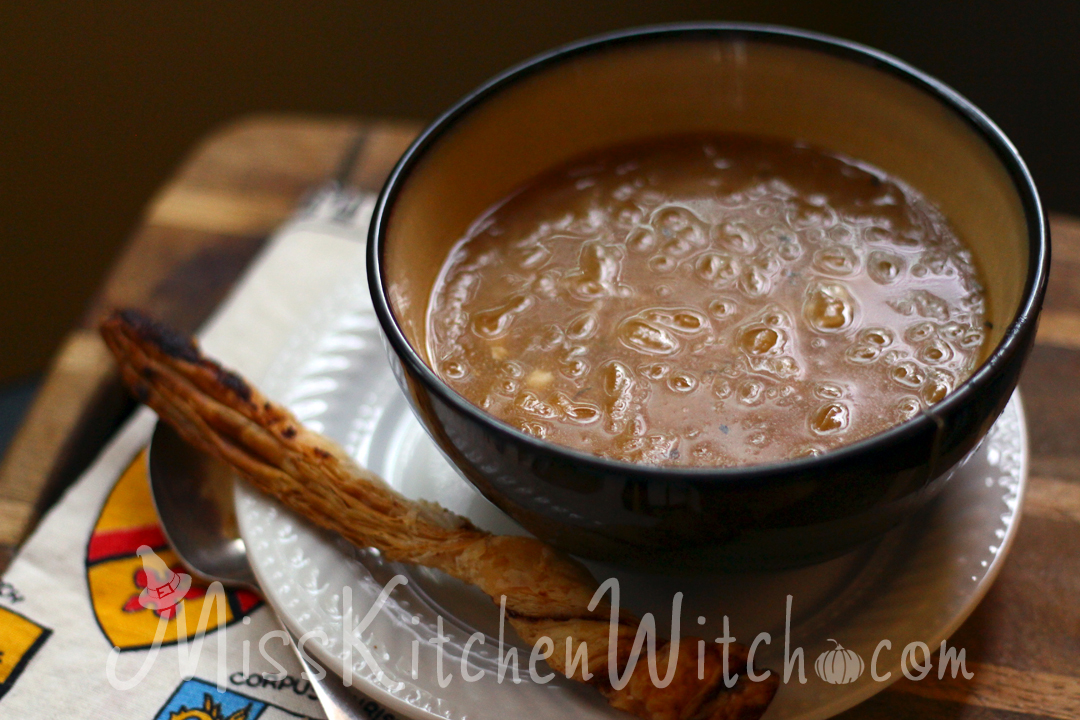 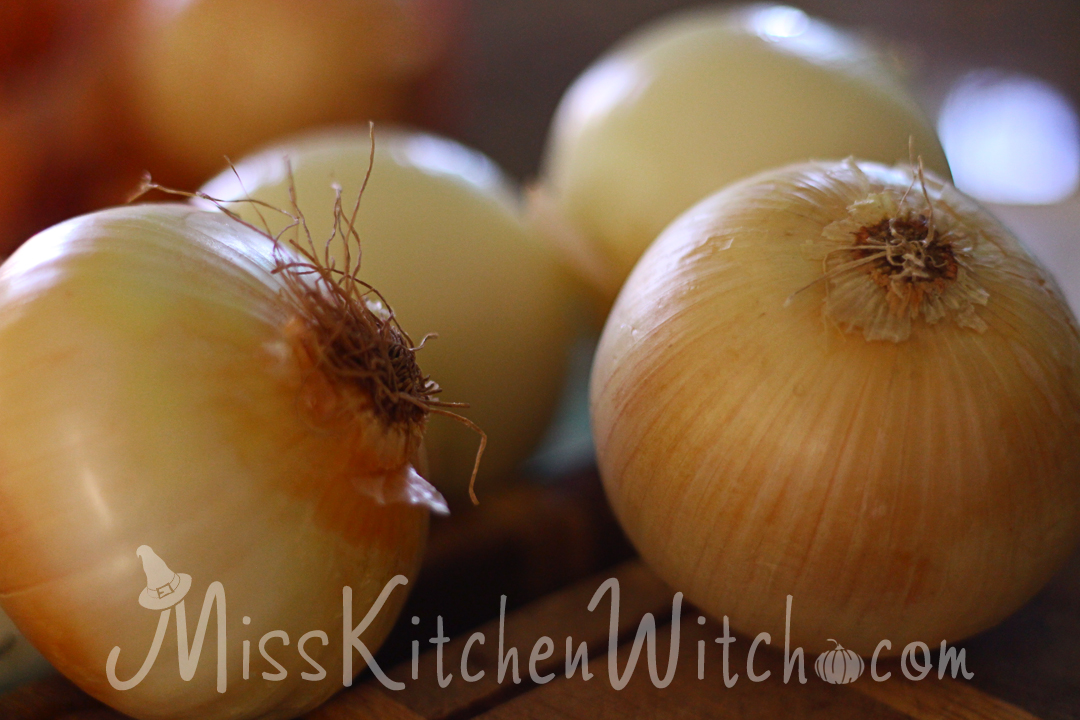 Heat oil over medium-low in a large pot. Add the sliced onion and stir until coated with oil. Cover, lower heat, and cook for 15 minutes without stirring. This will sweat the onions, bringing out their natural juices and sugars. 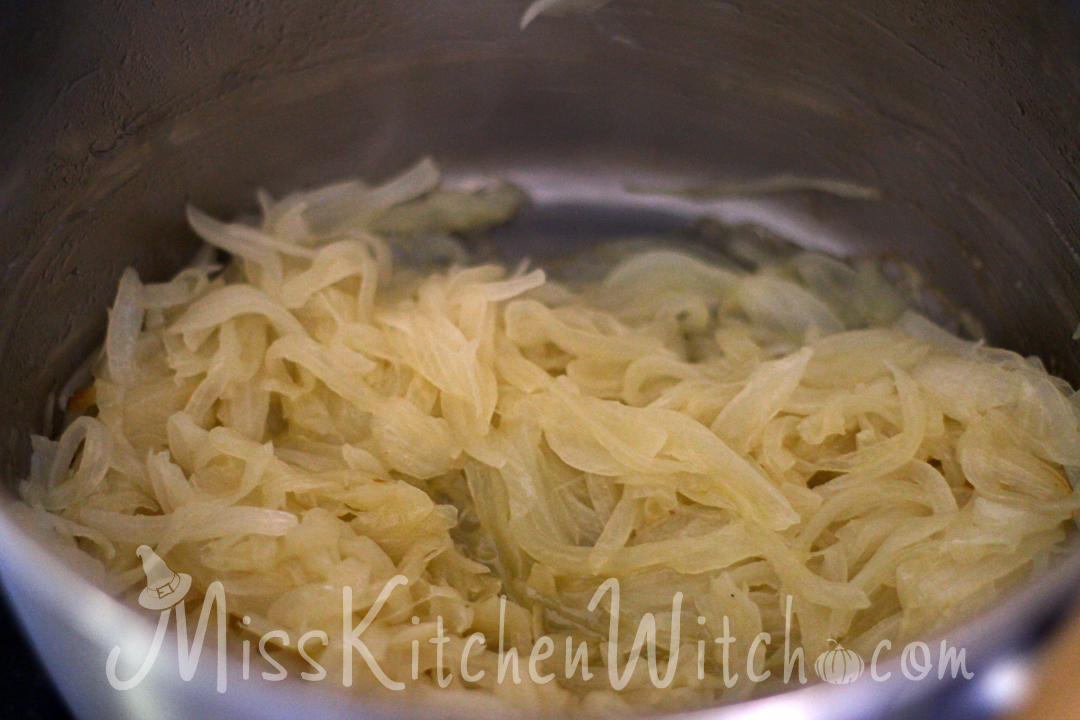 Turn the heat back up to med-low and add in the sugar and salt. Cook, stirring often, for about 45-60 mins or until the onions have become a caramel brown. 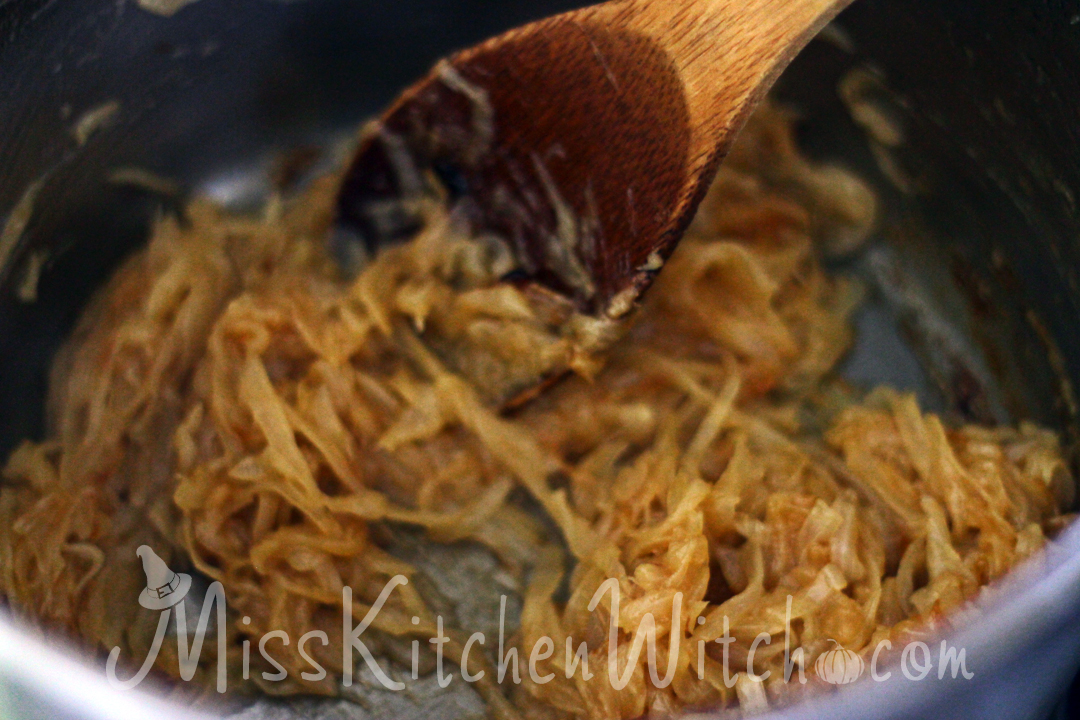 Add the flour and cook for a few minutes. Slowly pour in the cognac, broth, and thyme. Lower heat and simmer for another 30 minutes. Remove from heat. Preheat oven to 400°F. 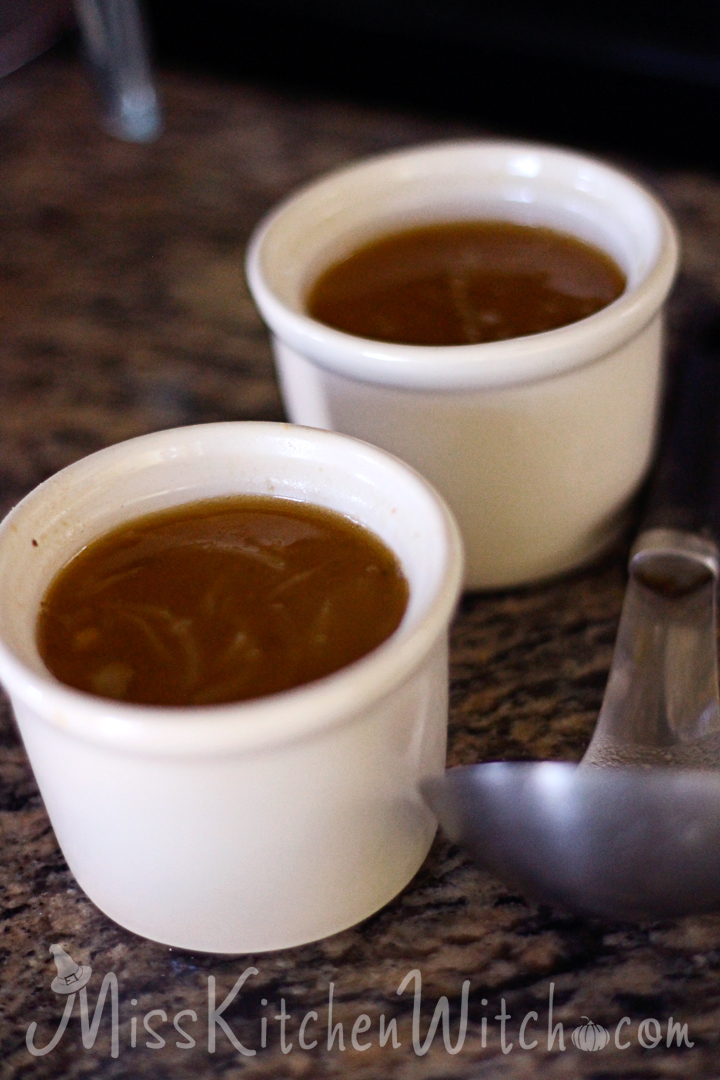 Transfer soup into your ovenproof soup bowls. Roll out the puff pastry on a lightly floured counter, so it is about a 30% thinner. Cut into squares large enough to drape over your bowls. Cover each ramekin with a square of puff pastry and sprinkle it with vegan cheese. Be sure to press the pastry against the ramekin very firmly, else it will slip in the soup while cooking. 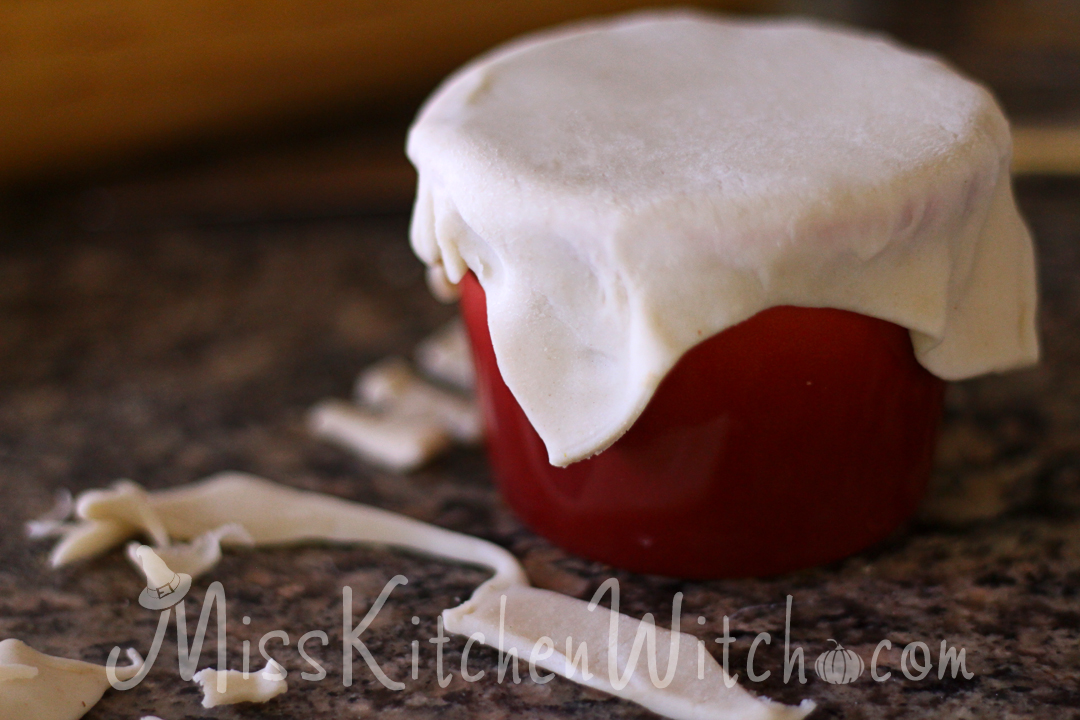 I first tried to do a star and it fell in. I retrieved it and let it par cook on a sheet pan, then laid it on the side of the ramekin. Still looks pretty cool I think. Place in the oven near the top and cook until the cheese has melted and the pastry is fully risen and golden, about 20 minutes. Serve immediately. 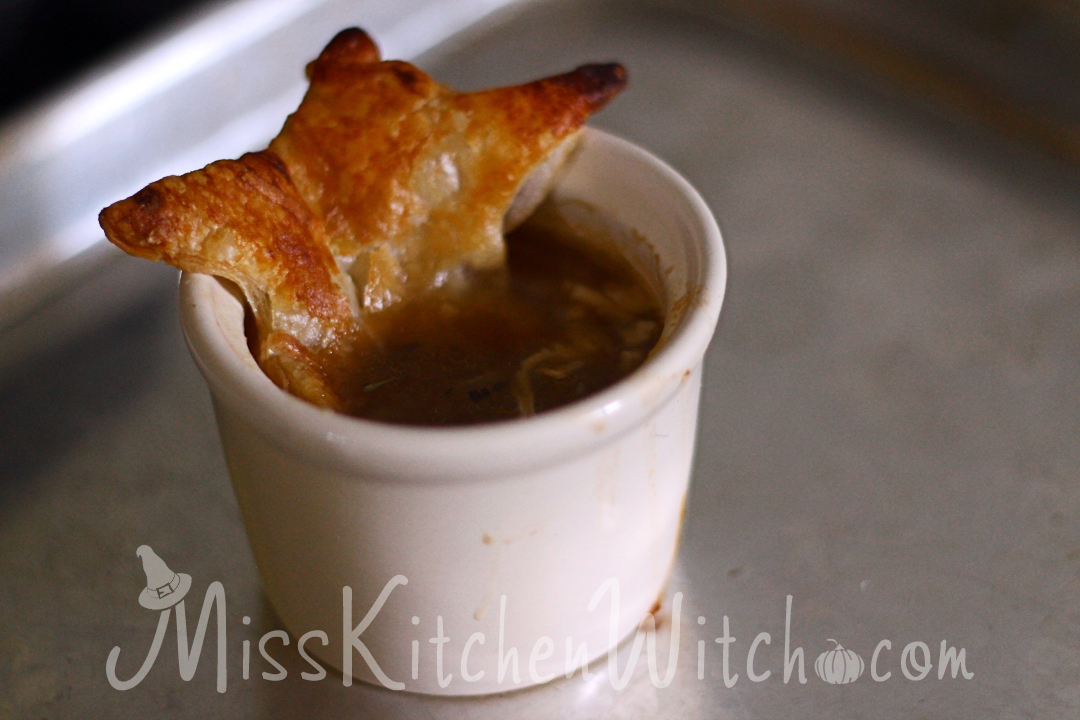 Second round I did the square, but added a another little Harry Potter touch and it came out much better. 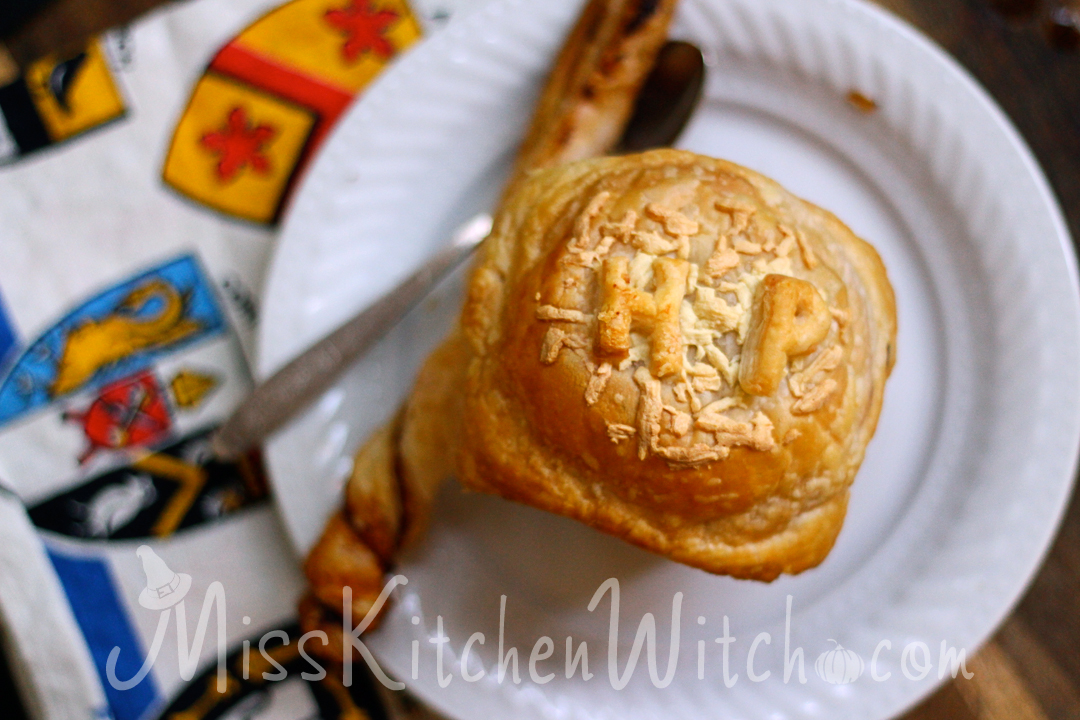 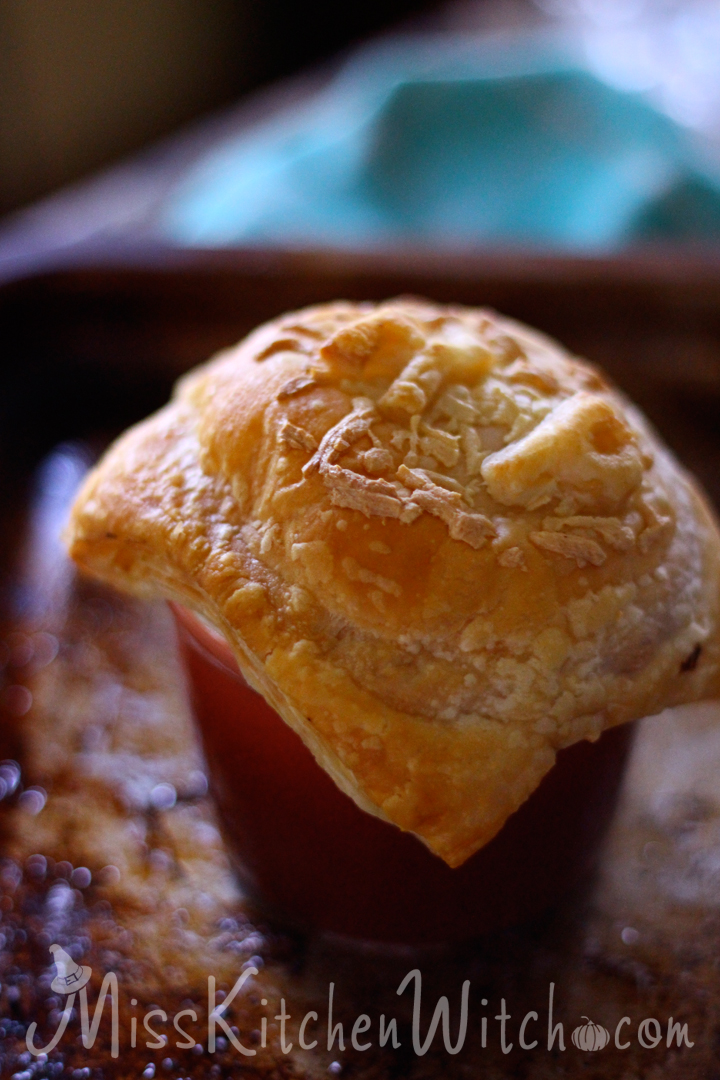